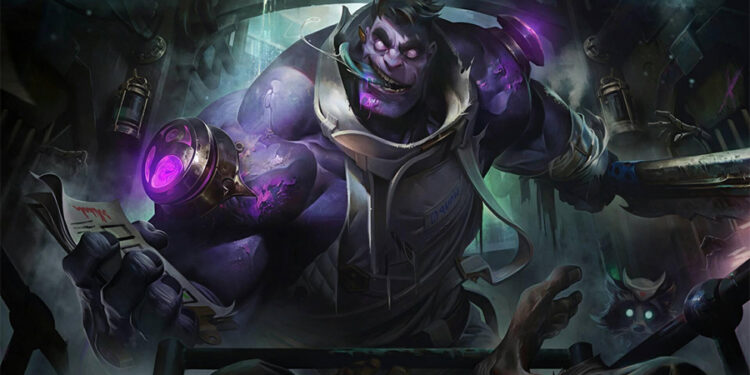 Dr. Mundo has shown up on PBE with a brand new VGU for him. Overall, his new abilities remain to be fairly low complexity, but Riot really excels in making these simple things shine. Besides that, his newly updated visual is creating positive reactions from the community (they do keep his tongue).

Passive – Goes Where He Pleases

Dr. Mundo resists the next immobilizing effects that hits him instead losing current health and dropping a chemical cannister nearby. He can pick it up by walking over it restoring a portion of maximum health and reducing this passive’s cooldown.

Enemies moving over the cannister destroy it. He also has increased health regeneration based on his maximum health.

Dr. Mundo throws an infected bonesaw dealing magic damage to the first enemy hit based on their current health and slowing them.

Dr. Mundo electrocutes himself for a few seconds dealing persistent magic damage to nearby enemies and storing a portion of damage he takes as grey health.

At the end of the duration, he deals a burst of magic damage to nearby enemies and heals his grey health if an enemy is hit (*heal is reduced if only minions or monsters are hit). He can recast Heart Zapper to end its effects early.

Passive – Dr. Mundo has bonus attack damage increasing based on his missing health.

Active – Dr. Mundo slams his “medical” bag into an enemy, dealing physical damage based on his missing health. If the enemy dies they are swatted away, dealing this ability’s minimum damage to enemies they pass through.

Dr. Mundo pumps himself with chemicals instantly healing a percent of his missing health. He then heals a portion of his maximum health over a long duration, gaining bonus movement speed and attack damage while healing.

These new abilities remain one of the most iconic mechanics of this champion: an insane amount of regeneration and somewhat incredibly hard-to-gap-close mobile hostiles. However, he will be more unpredictable due to 2 skill shot abilities, allowing him to trade better in the lane and somewhat close the distance better than before.

Not only that, he now has a flexible way to deal with hard crowd control, but to pull that off, he has to trade off a large portion of his health. This will greatly help Dr. Mundo survive in lots of different team compositions and punish him if he decides to over-reaching.