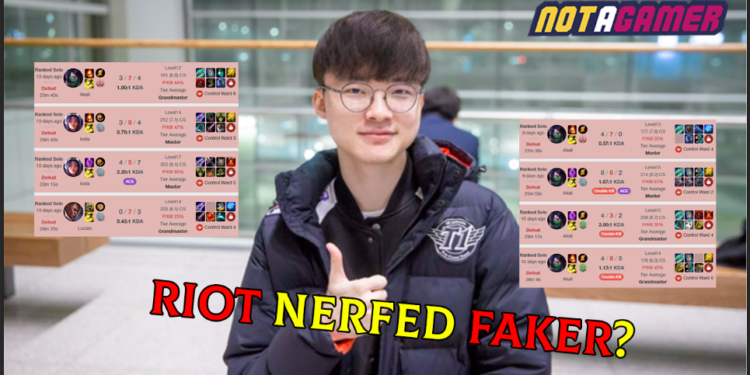 Not being able to play internationally, Faker stayed at his gaming house to stream and climb the rank ladder at the end of the season, but it seems that the Demon King’s climbing process is not very smooth. Let’s read more about it with Notagamer!

Faker and T1 don’t have much time to relax after a long season. During this time, in addition to climbing the rank, the whole team of T1 is trying new forms of entertainment such as playing Among Us or making a few small mini-games in League of Legends.

Of course, they still have to practice in solo queue continuously to at least receive the rewards at the end of the season and to have a high division so that they are still considered as great players.

However, during Worlds 2020, his own climbing process doesn’t seem great when he is constantly matched with the “gods”.

Here is his op.gg profile, you can see his history yourself: https://www.op.gg/summoner/userName=Hide+on+bush

Red series of defeats have probably made Faker so upset with Riot Games by “intentionally” matching him with “overweight” teammates that he cannot bear with:

Faker blamed: “Of course when I go bot, our mid loses, our bot loses, our top loses, our jungle loses. Because I’m so good Riot manipulated matching balanced.“

Since this sentence is invented, from now on, in addition to “Game’s errors”, Faker had one more very “reasonable” reason to cover his under-performance.

You can see more of his highlights here: