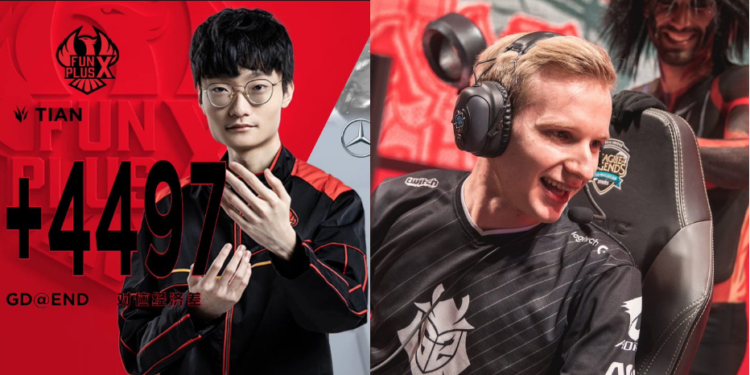 Jankos, the Polish star, was demolished by the Chinese champion while playing in the China Server. Wanna know more about his defeat? Notagamer has collected some information below! Let’s get straight to the details!

In 2019, G2 Esports was the pride of Europe when the team continuously defeated many representatives from Korea, including SKT, to enter the Worlds’ final. Despite their extremely high performance, the greatest team of LEC still lost to a very strong Chinese team at that time, which was FunPlus Phoenix.

There are many reasons that prove FPX is stronger than G2. Doinb’s diverse champion pool with a high-skilled performance was one of those reasons. Moreover, FPX also has an extremely talented jungler who brutally crushed G2 into pieces – Tian. In the final, he played impressively, especially with Lee Sin. That performance completely eclipsed one of the greatest junglers of LEC – Jankos.

Therefore, the 25-year-old Polish star is very afraid of confronting Tian. However, it was hard to avoid him when Jankos had to climb the rank ladder in the Chinese server for the bootcamp. Recently, the two rivals finally met each other again. The jungler of FPX was the one who started talking at first. Jankos was completely taken by surprise when he discovered that it was his rival who beat him last year in the Worlds Championship.

In that match, Tian picked Graves while Jankos brought out Kindred to cope with. The result was the same as it was last year. According to the Polish jungler, he lost two consecutive games with Tian on the enemy team who was also playing in the Chinese server. Fortunately, Tian could not be present at Worlds 2020 this time.

Lost two games in a row to Tian JG. YEP

In the Regional Qualifiers, Tian and his teammates lost 3-2 to IG. But when it came to the final, IG suddenly lost 1-3 to LGD. It’s hard to believe that the two teams that used to win Worlds had failed to make it to this year’s tournament.