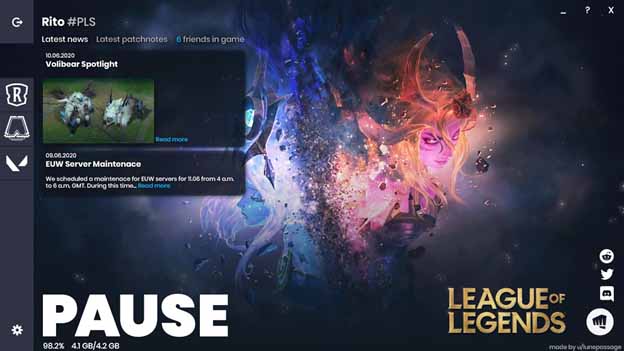 Remake LoL Client – Perhaps having to stay at home for a long time still has to look at the boredom of the League of Legends client too many times, so this guy decided to take action

For long-time gamers like us, how the client log in of the game is not so important, even for SEA gamers, the Garena interface is still the same. However, for new players or little to learn about League of Legends, they make a good impression with the vivid images from the client that makes them more attached to this game. Isn’t Riot aiming for new players in most of their games?

However, in one way or another, Riot Games has removed the cool things like live wallpapers, integrating short cinematic into the client, making it extremely boring.

So recently, a gamer with a Reddit account, Lunepassage, decided to replace the redesign of the League of Legends client by dubbing videos like the introduction of the latest 2 Lux skins to add more life.

This guy is even ahead of his time with other games like Legends of Runeterra, Teamfight Tactics, VALORANT in this product.

The products of the gamers above are extremely detailed, even making the introduction of the upcoming games of Riot Games, which will most likely be put on the same client with League of Legends in the future. At home against epidemic also makes gamers come up with many great ideas, not just League of Legends employees right.