How to TOWER DIVING like high ELO players Part 2 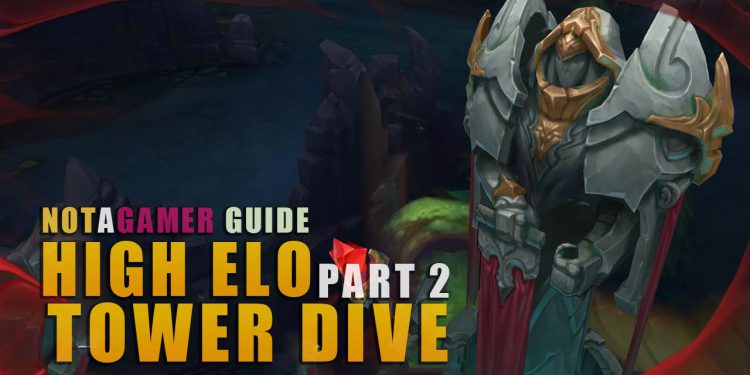 In last part, we have known about tower and how to use the minion wave to tank some shots from tower to get into the position. But what is the proper tower diving position? There are two situations

When enemy laner is farming under their tower then you unexpectedly dive in and out, this is a “Fatality win”. In this situation, you will need to stack minion wave as much as you can, then follow them to the tower and NOT SPEND ANY SPELL OR SKILL OR MAKE DAMAGE TO ENEMY. While the minion wave is pushing under enemy tower, you will want to move to the back of the tower, or call jungler gank from behind of the tower. After that, enemy will be trapped under the tower for the dive.

(Elise goes from behind while nautilus is tanking)

If enemy can escape and head to their allies or the base, MISSION ABORT! Recall while the minions wave is still under tower so that when you come back, you can stack a new wave without any damage made on your tower. Getting behind tower works in all lanes and in both side of the map, but I recommend TOP and BOT lane, because MID is riskier and harder to dive.

Now as we know, League of Legend is a team game, players need to co-operate with others. For the best dive, I recommend you should dive with a partner. While all of your allies are in range of the tower, one must be tank and draw tower aggro. You should try to draw aggro right after tower shot a minion, this will maximize the time for dive. Once you draw aggro from tower, all allies must use CC on enemy to hold them back. A tip is you should use tour guaranteed CC first during the dive because it sets up your allies to land their abilities. When enemy is locked down, your team must make as much as possible damage and make the kill before tanky champions get low.

What makes Miss Fortune/Amumu the strongest duo in the bot lane?

The difference in each team’s HP

Available abilities and summoner spells and also their cooldowns

The state of the map