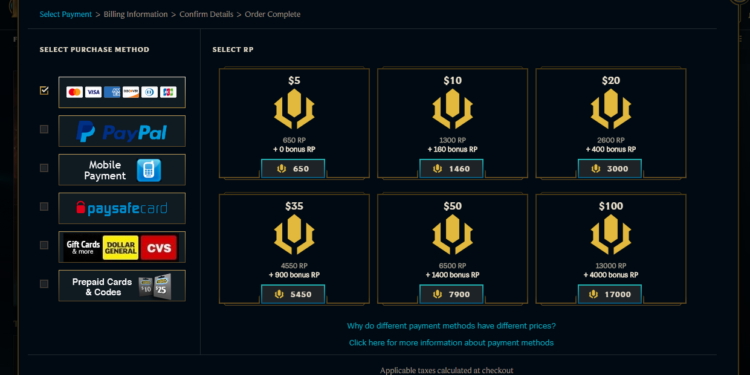 Riot Games will update the RP prices on July 15, and the change will affect several regions.

On the latest dev post, Riot announced they’ve made the adjustments this year, “based on currency fluctuations that occurred in 2019, and new regional taxes that were introduced in early 2020.”

Riot is raising RP’s global pricing to compensate for tax policy, inflation, and other relevant issues. This update normally arrives at the beginning of the year but due to continuing economic slowdowns from around the world, the developer decided to postpone it. Latin America and Brazil are the regions that will see a straight price increase.

In Latin America, the new prices will vary country by country. Latin America is divided into two servers, while Brazil has its own servers.

There are currently discrepancies in the pricing of RP in Latin America and North America. NA players pay $100 for 17,000 RP, while players in LAN would pay $80 for the same amount of RP. These three servers represent17 percent of the League of Legends player base.

In Latin America and North America, there are currently differences in the price of RP. NA players pay $100 for 17,000 RP, while LAN players pay $80 for the same amount of RP.

TFT’s mobile version recently launched its own version of a store, selling Little Legends eggs and other cosmetics. Regardless of playing cross-platform, TFT mobile is not using RP or Blue Essence, but real-life money. Players are required to complete every purchase, depending on the OS, via the App Store or Play Store.

Although prices are comparable between TFT mobile and desktop, Riot will be solving any price differences that might exist between certain regions.

New Zealand, Europe, the United Arab Emirates, Japan and Egypt will see a decline in prices in their regions, some dropping by as much as 20%. The prices in TFT mobile will increase in Latin America, meaning that no matter what game mode they play, Latin American players will soon be seeing higher prices.

All the changes to affect prices will take effect on July 15.