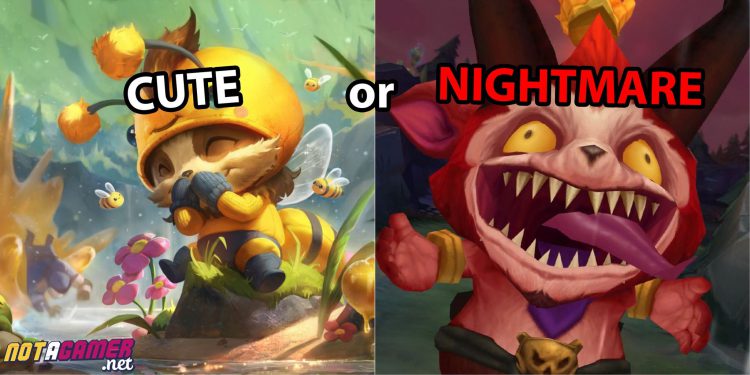 Launched in 2009, Teemo has a petite size and somewhat “cute” appearance, but the Swift Scout still owns a huge anti-fan force. Why? In your opinion, is Teemo cute? Join us to learn about this interesting champion!

Possessing quite a simple skill set but still, he is absolutely annoying to enemies: Invisible, blind shot, mushroom “cultivation”, poison injection,… these are the things that made Teemo’s name – the most hated Yordle guy at all time.

In every severs, many gamers have given “affectionate” nicknames for him such as “skunk”, “dwarf” and “obnoxious bee”,….

In particularly, just the funny and innocent laugh of Teemo was enough to provoke the opponents. In every game mode, most Teemo players rarely choose to solo skills fairly because they will usually appear as “hardworking farmers”: growing mushrooms everywhere.

Mushrooms, mushrooms, mushrooms and mushrooms, Mushrooms everywhere! When you step on, it will explode and cause a tremendous amount of damage while also burning your HP slowly. Imagine your team have to buy 4-5 Oracle Lens and constantly searching for Teemo’s mushrooms one by one, avoiding “unfortunate incidents” that could kill you quickly, then is Teemo really cute?

Teemo’s skill set makes him an annoying guy because every skill has the effect to drive enemies crazy. Blinding Dart (Q) make the opponent miss all the basic attack, his passive makes him twice as obnoxious since he suddenly invisibly leaps from the dust and then finish an enemy who has low HP, runs quickly with (W) causing the enemy players unable to chase him down.

Turrets have been seriously bugged since 12.14, dealing much less damage and affecting even pro games

You can win when you solo with him and then die later again by being poisoned or stepping on a mushroom that he put “messy” on the lane. If your team is trying to invade the opponent’s Nexus together, but there are a lot of mushrooms. Maybe when you reach the turret, you have already trapped by the mushrooms. Sometimes standing in the dust to return, you carelessly bumped into his mushrooms, somehow without pressing B you still return to the Base.

Despite being hated, but obviously this Yordle guy still owns many fans!

The reason is very simple because he is too cute. Small appearance, a short dwarf but the most “badass” Yordle, simple gameplay, both fun and easy to get kills. The lines, a cute voice makes many people love him. Many players also rely on the “obnoxious” of Teemo and bring the inhibition to the opponent out of joy.

Indeed, cute or obnoxious Teemo is a very difficult question to answer, right?