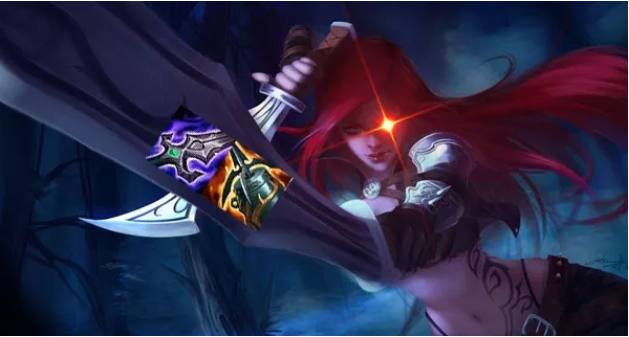 Not only brought a complete overhaul of the equipment system, but the Preseason 2021 of League of Legends also made some very remarkable tweaks for several champions. Katarina is one of the champions to received the most changes in this year’s Preseason.

The fact that this assassin now has the ability to trigger on-hit effects by pick up Daggers, using E – Shunpo, and moreover, using R – Death Lotus will trigger three-time all her on-hit effects had completely changed her playstyle and item buildings.

These changes, at first – seems to be some kind of meaningless, since Kata was originally an AP assassin, adding on-hit effects won’t make any sense to her item building style or playstyle as well. The only imaginable scenario where these changes will actually become good is by building Narshor’s Tooth – which used to be viable and did become trendy in Patch 10.23.

But after Patch 10.24, things had changed forever, and in a way that no one can predict. With the nerfs on AP Mythic and Legendary items that weaken her 10.23 build, and a lot of buffs on AD items, especially for Kraken Slayer – this item got buff on both its base AD stat and passive damage. Eventually, a new Katarina playstyle had come in handy and had been proven to be extremely effective in Patch 10.24: AD Katarina

With Conqueror remains OP, soon enough, many players soon realized that on-hit effect builds will help Kata utilizing her damaging and healing potential to the finest. Soon enough, top players – including the “One trick ponies” and even Faker has changed to this playstyle.

One of the biggest strengths of this playstyle is better laning phrase compare to the “traditional builds” style. By building AD, Katarina can farm, trade and has better regeneration. While better laning means better scaling, she can now buy Kraken Slayer and Blade of the Ruined King to deal with one of her biggest weaknesses ever since: Tankers. Katarina is no longer a wait-and-jump-in assassin as she used to be, but instead, an AD bruiser that can deal tons of damage with a better surviving chance at all stages of the match.

Blade of the Ruined King and Kraken Slayer are her core items with this build. These items provide good AD stat and Passive damage to help her dealing damage sustainably during the match. All other items are situational based on what you need: more damage or more survivability. Death Dance to deal with AD, Ravenous Hydra for extra damage and lane pressuring. You can also build Zhonya’s Hourglass or Banshee’s Veil in specific situations

Conqueror is the spirit of this playstyle with extra damage and healing, Triump for survivability in combats, Legends: Tenacity to deal with crowd control, and Coup De Grace for extra damage. For the secondary page, there are no much choices left but the healing effect from Taste of Blood and Ravenous Hunter for better laning phrase and extra regeneration.

Long story short, AD Katarina is a new build that has proven to be extremely trendy and effective by taking advantages of changes in items, with the buff of Kraken Slayer and other AD items in patch 10.25. AD Kata reduced all her weaknesses while providing her extra kits to survive and dealing damage – not as an assassin, but a bruiser.

Preseason is always a time for test and new playstyles, what do you think, how about trying Katarina today?