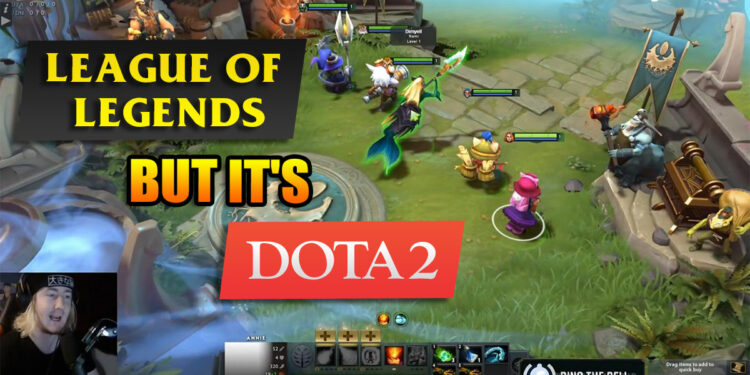 The League of Legends mod in Dota 2 was developed by the gaming community and seems to operate very smoothly.

League of Legends has continued to develop since its inception, being a counterweight to Dota 2 and is currently one of the MOBA games that hold the world’s most players. The League of Legends actually has a large pool of heroes with Yone debut – Yasuo’s brother is the 150th champion.

Nonetheless, none can believe that League of Legends generals are so various that they will “overflow” into the Dota 2 universe. This may sound unbelievable at first glance, but the modder team of Dota 2 has been active in investigating and improving the concept “League of Legends in Dota 2”. As a result, we had a unique “crossover” between those two “rival” games.

In a video released by YouTuber RossBoomsocks at the beginning of August 2020, he experienced Dota 2 with 10 League generals showing on the map. Overall, the game lasted more than an hour, but it all seemed to look really smooth, even though it was only a mod made by a gamer.

In the first stage of the champ select, 28 characters are divided into 3 separate categories including Strength, Agility and Intelligent with background images of Dota 2 heroes. Nevertheless, such were the names of the League of Legends generals such as Ashe, Jax, Annie, Nami, Tristan, Yuumi,… A slight bug seemed to appear on the champ-select screen, but everything seemed to be very smooth as soon as the match began.

During the game, the League characters figure and movement are designed in a perfect and precise way. Also, the detail is clearer replicated via the graphics application Source 2 platform. The hero effect skill outcome, though, was just basically reworked but not perfected and flawless. Some characters like Pyke are still visually incomplete but focus only on the Dota 2 hero Bounty Hunter.

The champions building items are entirely dependent on the items available in Dota 2. As can be seen, RossBoomsocks builds Blink Dagger, Refresher Orb, and Aghanim’s Scepter for Annie. All the hero’s skills interact quite smoothly with the item, and it doesn’t seem like there’s a game error here.

The League mod in Dota 2 is thus considered to have been quite successful so far. Perhaps if they have enough time and money to accommodate, they can carry all the League generals to Dota 2 and we’ll have a fantastic “crossover” between the two games as well.