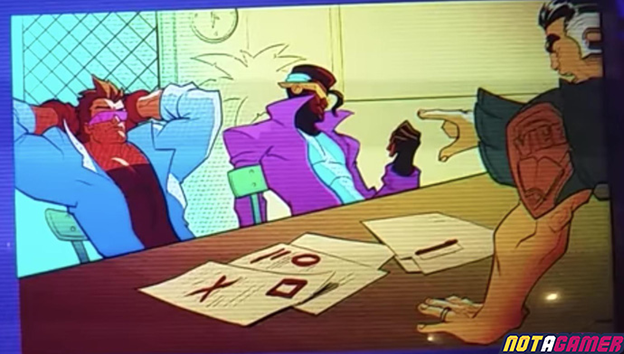 In the League of Legends Patch 9.14, Riot Games officially released the group Demacia Vice with two champions, Garen and Lucian. This Skin made many gamers very excited because it recalled the decade of the 90s, when barrel games, 8 bit graphics and flashy style were still very popular.

Riot Games understands that. They understand that creating such a line of skin will make sure players pay money to own, especially players in Western countries. Not only that, they also released two mini-games related to Arcade and Demacia Vice Skin. In one clip streamer in North America is Pants Are Dragon, sharing, these 2 games are called Super Arcade Gunner and Demacia VICE Squad.

In the first game, players will be given the choice of champions with Skin Arcade or Demacia Vice. The gameplay includes killing monsters in a vertical screen format. For easy understanding, you can think of the famous Commandos game.

In the second game, players will be transformed into two characters in the Skin Demacia Vice as Lucian and Garen to quell the gangs. This game has the same gameplay as the familiar Arcade game with horizontal screen and monster attack, boss kill to level.

At the introduction of this game, a gamer discovered a lot of interesting details. In particular, he has seen a series of champions who will wear Demacia Vice Skin through the game. Notably, this outfit is not only encapsulated in Demacia generals but also expanded in many other kingdoms. The above player has discovered all 14 champions appearing in the game.

Yasuo plays the undercover agent. Yasuo’s conversation paragraph refers to a very famous meme in Western League of Legends. That is Ezreal kissing Shyvana’s feet. The Blone Kid here is the Ezreal guy, the Half-Dragon is Shyvana.

As mentioned, it is unclear whether the champions will appear in Skin Demacia Vice.

However, it is very likely that Riot Games will continue to give his “good son” to wear such a hot skin to attract players.