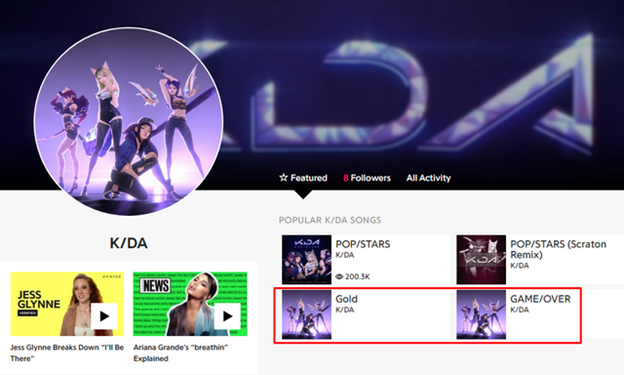 The K / DA group of 4 members Ahri, Evelynn, Akali and Kai’Sa has been one of the hottest costumes in League of Legends.

About a year ago, K / DA’s Pop Star song was a surprise even when it introduced a new outfit of the most beautiful champions in the game.

As soon as the Pop Star MV was uploaded to Youtube, this clip has received a lot of attention and until now, it has received more than 260 million views and along with more than 3 million likes.

The K / DA outfit group with tight and sexy outfits was accompanied by flashy effects of the limelight, all of which made K / DA win the hearts of the majority gamer.

The four members of the group are extremely beautiful generals including Ahri, Akali, Evelynn, Kai’Sa, the hotness of the K / DA group makes this group of costumes one of the most successful products of Riot Games.

After nearly a year of debut, perhaps “Pop Stars” is the only song of this group, recently a few gamers have discovered that Riot Games is about to release more new songs.

Specifically, on Genius.com, a site that aggregates information about the music world, the K / DA catalog has a list of new songs coming soon.

Although there is no information from Riot Games yet, this is also an extremely praiseworthy signal for the player community