League of Legends: LCK is just a trashy area, what do the community say after the failure of SKT ??? 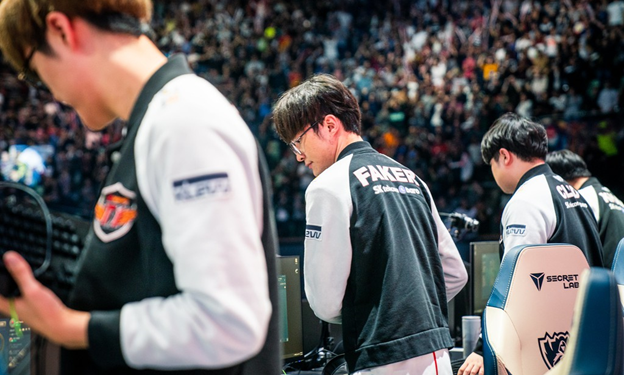 The journey of SKT T1 at Worlds 2019 has ended too painful. They were further defeated by G2 Esports themselves – Opponents eliminated Faker and teammates at the MSI 2019 Semifinals.

The reaction of the Korean gaming community after each defeat, of course was disappointment, and because the loser was SKT, it seemed that the LCK was dyed a dark color. Their strongest representative was defeated bitterly, the Koreans seem to be slowly accepting the fact: their position is no longer the number one.

– SKT, they are trash

– A group of failures, I do not understand why they can make such stupid mistakes

– Please don’t call the players trash. I was hoping we could celebrate the victory, but I ended up crying … G2 Esports is on a different level from us, but believe that we will be stronger again by the year after…

– I cried when I saw Faker’s hand shaking.

– After this Bo5 series: It’s that we realized the LCK is no longer the strongest.

– Don’t say those words. Faker did not perform well today, but Faker is also human. He also had to go through difficult times, many people the age of Faker even retired, but does he deserve to be blamed for it? Faker will still be praised for all the achievements he has made. And for those who never get there, shut up.

– SKT made a lot of mistakes, Faker became the focus of criticism because he is the most outstanding player among them.

Meanwhile, the European League community has a party. For the second time in a row, Western Europe has a representative present in the Finals of a World Championship, and this time, they are full of hope to enjoy the dream of coronation right at home.

– Mikyx had a great game against Gragas, he dodged all threats and made extremely standard actions throughout the game.

– I don’t understand why SKT could make it to the semi-finals, if SKT met G2, maybe SKT would have been eliminated from the start (Smile)

– I’ve never seen a team that can only have 1 Baron during the Bo5 series and still win.

>>> Honestly speaking, Baron only works to push the lane, but pushing the lane like that horrible need nothing more Baron.

– G2 Esports gave up on all major goals to focus on map control, and this style of play worked well with good goal exchanges. IQ 200

– At the corner of the camera facing the players, Faker’s hand was actually shaking. It is crazy that G2 can perform so well, they have never lost any Bo5 to this squad.

Frustration welled up in the minds of SKT players, and the joy of Europeans on the day when their greatest pride – G2 Esports, proved to the world that the MSI championship was not is a blessing.

Once again, LEC and LPL will face off against each other in the Finals of Worlds 2019, for the second time in a row. But with what has shown, perhaps G2 Esports will still be a more appreciated name than Fun Plus Phoenix, and the dream of crowning the world’s biggest tournament right at yard home is coming closer to them.