League of Legends: MSI 2019 – The Korean community is extremely angry at SKT’s failure, SKT is a Team useless bunch 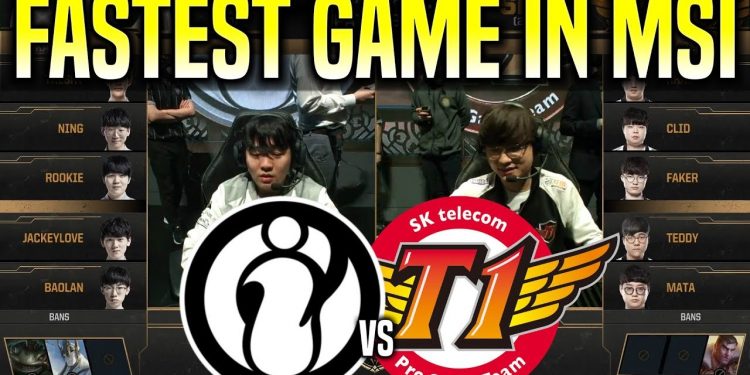 Before MSI 2019’s second day of competition, fans and international LOL community are looking forward to seeing the classic battle between SKT vs IG. On the one hand is SKT – the monument of the world is on the way to rediscover the glory while the IG is the invincible giant.

Thinking the match would be tense and intense, but after only 16 minutes of play, Faker and his teammates had to receive bitter defeat before IG. This is even the fastest match in MSI’s history and the World Championship. And it didn’t take too long for the community LOL to mock Faker and his comrades on the forums:

Even the Pause Game because of Mata’s machinery problem also became a mocking topic of the community on Reddit.

“Mata: Referee, my R button is broken – Arbitration: Lmao, you’re only level 5” (referring to the Sona – Taric couple until the 9th minute only lv5).

“7 minutes saw Draven bring out the Bloodthirster, Mata thought it was a bug and told Pause Game referee.”

7:02 ‘JackeyLove Draven brings the Bloodthirster to beat Mata and Teddy

“Faker reappeared with new team to write history – the history that he couldn’t do with Kkoma with the old lineup” – a humorous Redditor shared.

“SKT T1 has returned to the international arena to prove that the weak LCK is not because of SKT absence” – SKT went to MSI with the responsibility to regain the Korean status – but ended up fruit after that ….

“Now that Faker and Teddy have entered history with two of the longest and shortest matches in League of Legends” (referring to the JAG vs SKT match in 2018, when Teddy even surpassed the record with 1465cs) – “But the overall result is that Faker lost both matches” – Faker has always been the focus.

Date of collapse of the LCK empire

“Up to this point, PVB still fighting on par with IG. They even nearly won it.”

“Summarizing IG’s matches: The most stressful: IG vs PVB. One Shot: IG vs SKT. What the hell in MSI”

A failure of Koreans

Yet they always thought that they were horrible, SKT was useless