League of Legends Rework: Upcoming changes of Wukong on the PBE Server 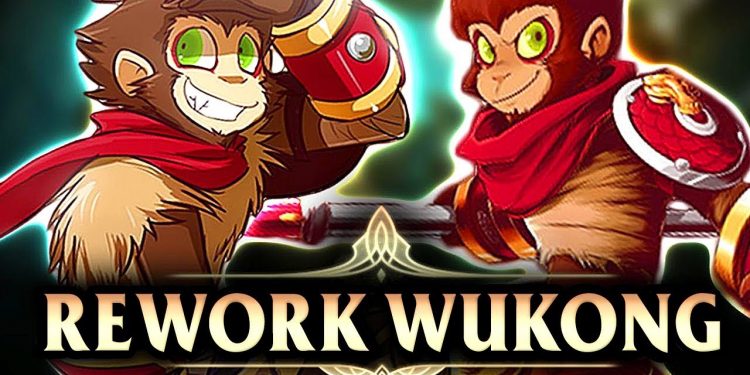 Hi folks, Whole bunch of details here on some Wukong changes we’re going to be testing on the PBE for a while.

First off, some context around them:

These changes won’t be shipping for at least awhile . We’re using art that’s borrowed from other champs/items because we haven’t committed to these specific changes yet. So even if the gameplay were to test really well, there’d still be some delay before we shipped them since we’d need to get the art revised.

There are some known bugs present in the modified abilities. Nothing that should have a meaningful effect on testing, but stuff that will feel a bit buggier than normal. Smaller stuff like this we don’t put time into fixing until a set of changes have been committed to either.

These changes haven’t been through a rigorous balance pass, so numbers won’t necessarily be representative of what they’d need to be for ship. The mechanics themselves are intended to be representative (e.g. Wukong’s Q heals him), so the specific numbers on the heal by contrast might be about right or might be meaningfully too high or too low. We’ve done enough testing to have confidence they’re not ludicrously off, but haven’t put them through a full balance assessment.

In addition to PBE testing, we’re also going to be running this changelist past some players onsite at some of our offices. That will give a more controlled environment than PBE can offer (more even and competitive games for example) and generates different feedback as a result.

Finally, this is a gameplay focused update. Things like changing VO, model, full animation update, etc. aren’t on the table at this time. We think that sort of work’s really important, but our docket’s currently full with other champions for it. Some art/audio adjustments are likely, but just those needed to accommodate the gameplay changes.

Ok, that’s a lot of context that isn’t all that interesting to most readers. Apologies, still important to share it though! Next up, goals of this work:

VFX start small at one stack and get larger with each additional stack applied.

Part 2 Stone Skin – Redesigned
When 3+ enemy champions are visible within 1400 units, Wukong gains Armor and MR equal to 20 + 2 per level + 0.2*his bonus Armor/MR respectively. Bonuses last for 6s and renews if enemies remain near. Currently uses the Gargoyle’s Stoneplate activation VFX when up.

Wukong’s live passive is functional (gives him power, influences his itemization), but real low on satisfaction. Would like to keep the teamfight survivability aspect though. Trying a double passive, where both parts hopefully have better appreciability and neither needs to be as relevant in all contexts for the passive as a whole to feel better. For the defensive bit, giving him Armor/MR ratios to make mixing in more defensive itemization, if desired, a more sensible choice. For the offensive part, looking to shift some power on the kit away from a team amp to a personal amp and allow magic damage output, whether from Wukong’s kit or elsewhere, to also feel better.

Q – Golden Magical Staff (was Crushing Blow)
Now has a passive where Wukong gets 125 range on his next AA after he casts any spell (not just Q).

Trying to give him more frequent access to increased range as a way to allow a combat pattern that’s both a bit more varied (especially in lane) and doesn’t necessarily have to be as bursty. Laning pattern also hopefully helped a bit by some sustain on the kit. Expectation is that basic effectiveness will be pretty easy to access, but extra range will allow a lot of optimizations, especially when combined with other parts of the kit.

W – Warrior Trickster (was Decoy)
Clone created now attacks nearby enemies dealing 50% of Wukong’s damage instead of exploding for magic damage at the end of its life.

Wukong creating a clone and Wukong pushing ‘S’ to stop moving will now look identical to enemy players (can bait them into believing you’ve cast W when all you’ve done is stopped moving).

Getting a bit more trickery in and exploring a combative clone as a fantasy win. Increased dash range pairs well with increased AA range passive from Q. Clone damage output being more relevant and increased potential for trickery hopefully gives some interesting optimizations.

E – Nimbus Strike
Other images of Wukong are now interactable clones that look just like Wukong and can be interacted with like any other unit. That means enemies won’t be certain which exact target Wukong himself is going to until he gets there. Clones can also block skillshots.

Now checks for secondary targets in a much larger area around the primary target.

Primarily, we want to enable more trickery and again, add some mastery points for those who wish to to optimize around. Reducing AD ratio both to decouple Wukong a bit from such AD-bound builds and as a result of adding power elsewhere. AD builds should still be decent, but not to the extent most other builds aren’t worth considering.

R – Cyclone
Other spells are no longer locked out while you’re using R. If you cast another spell, it will immediately cancel the ult in progress. Makes it easier to chain spells together basically if you want to end the ult early.

Wukong’s ult is pretty well liked and short of making really major changes, wasn’t finding any better and strong directions here. Just a small useability adjustment as a result. Considered increasing the damage tick rate, given that’s a common player request. Concluded it wasn’t the right call though, given that both binds him more to Black Cleaver and pushes him back towards burstier damage with his new passive. The knockup by contrast already checks for targets much more often than the damage is dealt, so there aren’t responsiveness gains to be had there.

Things feedback would be particularly appreciated on

If you’re playing as Wukong:

If you’re playing against Wukong: