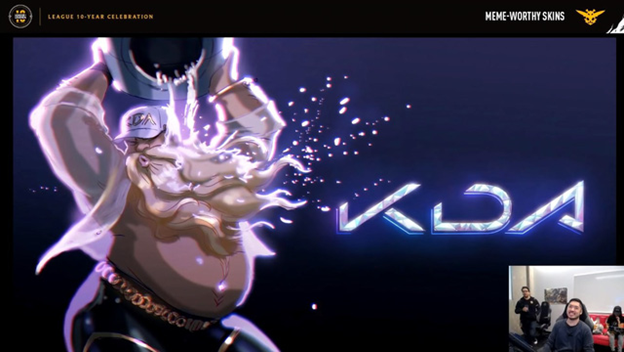 Riot Games had a skin design program at the request of the fans and they released many things…..

The 10th anniversary of League of Legends is one of the events invested and carefully prepared by Riot Games with many special content such as LoL Mobile, TFT Mobile and many other things … Let viewers do. acquaintance and interaction with Riot employees, a “custom-made” program was organized.

In this program, Riot Games artists will receive requests for costume ideas and they will quickly draw them. One of the pretty requirements that Riot artists have partially fulfilled is the Rock – Scissors – Paper outfit.

This group of outfits was requested by fans for 3 champions Camille – Scissors, Malphite – Stone and Ivern – Paper, the first two costumes proved quite reasonable with the basic shape of the champions.

However, the thing that surprised people the most was the super-weird costume, K / DA Gragas, which was requested by fans. More precisely, the artists received requests to draw K / DA groups skin with Gragas, Braum, Taric and Graves, but due to limited time, they had only finished drawing Gragas.

Fortunately, this is just an entertainment program, the fact that Gragas has K / DA attire will definitely never happen. Not long ago, fans requested Star Guardian Urgot skin. Riot then responded by putting this skinless line on Star Guardian Xayah.

The idea of ​​a male K / DA boy band is not new, but the fact that the generals own the image is so heavy and they own music costumes, Riot certainly will not.

Anyway, this show shows that Riot Games cares about the community and always tries to connect with players around the world in every aspect from serious to fun.