League of Legends: The most powerful URF combinations you should try, but pray they are not banned 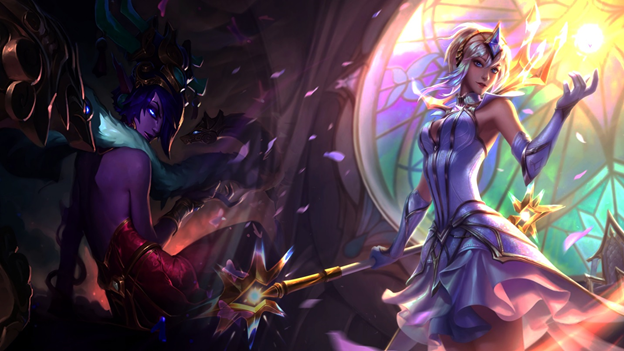 Lux and Morgana have long been known as two very strong generals in URF. With their extremely annoying CC skills, Lux and Morgana are very effective at controlling, binding an enemy to death.

With just one hit of one of these champions, you will only be able to stand still until you count. In addition, the duo also proved uncomfortable with damage techniques from afar. With Lux’s ultimate only having a cooldown of about 10 seconds, while Morgana’s Q can hold enemies for up to 3 seconds at the end levels, rooting and blowing one or more targets is very easy.

In addition to being annoyed by the ability of having too many control and slow effects, Lux and Morgana can also protect themselves with each of Lux’s W and Morgana’s E.

The two champions who are already annoyed in this rank are even more upset in URF. With an 80% reduction in cooldown, Blitzcrank and Thresh’s pulls will be used repeatedly to annoy the opponent. Even players who are not familiar with these two champions can use them easily when Q’s cooldown is very fast.

In addition, the last two moves are also very uncomfortable for the enemy. Being dragged, kicked off, slowed down is a really unpleasant experience when facing the Blitzcrank and Thresh.

Maokai has always been one of the hot champions in URF with his ability to recover and a lot of control skills. Maokai in URF does not possess beautiful gameplay, simply hangs, slows, recovers and abuses.

The defeat of this Maokai is indeed torture. So what if Maokai joined forces with Soraka? Maokai’s ability to break into enemy squads and toughness will become stronger with Soraka’s buff ability. If there is no control in the enemy squad, it is extremely difficult to destroy Maokai.

Constantly slowing down, clinging and exerting control effects along with strong resilience are the reasons for us to use this duo in URF.

With his Predator has greatly reduced cooldown in URF and his speed, Rammus is also listed as the most annoying champion in URF mode. In particular, Rammus is even more dangerous and annoying when combined with Yuumi.

The ability to accelerate along with the skill set to heal and slow down the opponent, Yuumi seems to be the perfect champion to combine with Rammus to create a duo that annoys opponents and is also full of entertainment.

Not a strong pair in URF, but an entertaining duo with a “long-range bombing” combo. By combining Zilean’s Time Bomb with Sion’s Slayer, you can “bomb” enemies from long range. In addition, we can also play Sion-style suicide bombers when carrying Zilean bombs directly on the enemy. With the tanker-style and the ability to revive Zilean’s ultimate, Sion will also become uncomfortable.