League of Legends: The next champion from Ionia will be Yone? Yasuo’s brother 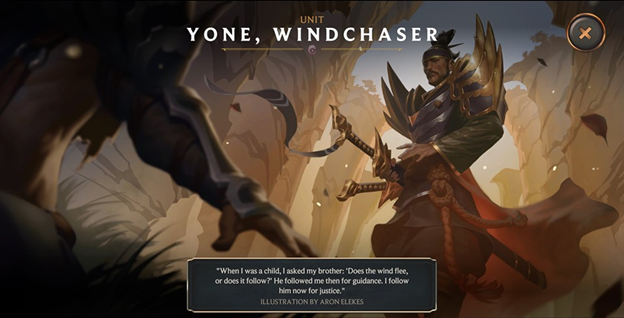 Most recently, the community has shared photos of Riot’s new game: Legends of Runeterra, a card game genre

It would be nothing special if the player did not find out in the list of Ionia region cards that had a very sudden appearance that is Yone – Yasuo’s brother.

This surprised many people and they thought he might only appear as a card, not in League of Legends.

However, many players have suggested that this is a way of revealing Riot Games’ new champions, the reason they gave these ideas is because Riot Games recently talked about the October Champions Development Roadmap and in which, there are the arrival of a champion from Ionia

Full text of the article:

Out of the Ionian underground comes a smokin’ hot new juggernaut. It’s been a while since we made a more straightforward, accessible juggernaut, with Darius being the last, so we felt it was time to add something new to that space. This new champion will thrive in the center of a brawl, laughing as they take hit after hit then furiously punching back, releasing all that stored aggression on their enemies’ faces. If you like letting your fists do the talking, getting into the heat of a pit fight, and smashing your opponents’ heads together, this may be just the champion for you.

With this information, it is likely that Yone will soon appear in League of Legends in the same way that Riot Games did with Senna.

However, all the above information is hypothetical and does not have any accurate information from Riot Games