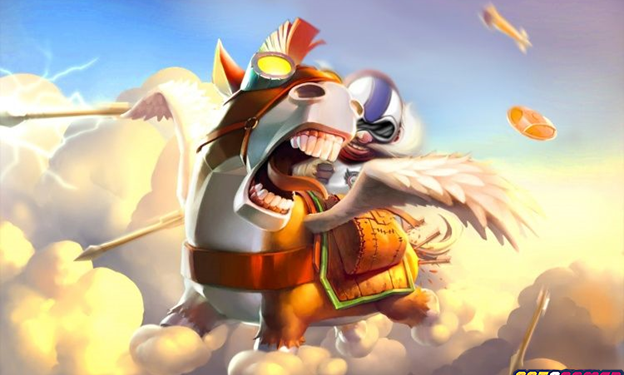 Hextech weapons are a combination of magic and technology to bring in an infinite power hidden within extremely rare magic crystals.

The hammer that accompanied Jayce to hunt down Victor was not actually made for that purpose. In fact, Mercury Hammer was an invention in Jayce’s youth. But unfortunately it was abandoned for decades because Jayce could not find a power source strong enough to launch it.

It was not until Jayce discovered the hidden power of Hextech crystal and learned how to exploit, Mercury Hammer was able to develop its strength for the first time after tens of years of throwing away.

Jayce always wanted to own a super powerful weapon that could smash all the way. Mercury Hammer can transform into Hammer or Cannon form with tremendous destructive power. In Hammer form, Jayce could easily break through the metal walls in a flash. In the form of a cannon, the spheres of energy fired can create a large explosion on a large scale.

Victor is not a bad person, just because his thoughts and wishes are different and inappropriate. The story of Victor and Jayce is only contradictions on the views and stances of two people who do not share the same thoughts.

Viktor is a young scientist with passionate heart. He always tried to replace the fragile thoughts and fragile flesh with Hextech technology to minimize the errors and losses that the “Man” part caused, the traumas of the past causing him to deviate from social norms.

With a contradictory perspective, Jayce destroyed the lab, accidentally killed all the victims Victor intended to save just to reclaim the Hextech crystal, and with a false report, Victor was assigned by the world. crime is a sick name and mental needs to be expelled.

Because of what happened, Victor resolved to build the Hex core to separate and eliminate weak emotions and body strengthening. The Hex core directly affects the power of the body by helping Victor to work tirelessly and make mistakes, while providing energy for Victor’s machines to function perfectly.

In addition, Hex core also fired deadly energy streams, enough to burn anything in the way, even creating terrible electromagnetic storms, wiping out everything it passed.

Ekko is a genius with ideas far beyond the imagination of a scientist, and Engine Z is a crazy invention, destroying all theories. With the ability to manipulate and bend time into super energy, Engine Z is considered an extremely breakthrough invention and has the potential to change the world.

With this invention, Ekko can easily bend time by turning energy and making yourself completely separated from the control of time, can travel faster and move through other spaces. together. In addition, Ekko creates time pulses that slow down enemies for a certain amount of time. The most powerful of Z Engine is that, when enough energy is accumulated, Ekko can reverse a small chunk of time, bring herself back a few minutes in the past, and create an energy explosion, killing pity on nearby enemies.

The pair of gloves marks the turning point of Vi’s life when she abandons the criminal path to save the lives of people she once intended to harm them. An unfortunate accident happened, and Vi decided to live more effectively by attaching a robot’s arm to save the trapped miners. Suffering from attaching arm to her body, in return, she suddenly received a huge amount of power, she easily paved the way and brought the miners stuck out safely.

The arm becomes a part of Vi’s body, reminding her of the path she has chosen. Vi improves gloves so that it no longer hurts when used. Because it is the hands of a giant miner robot, the arm is very heavy and has tremendous destructive power, perhaps not as terrorist as Saitama, but perhaps it is rare for anyone to eat a punch of Vi and still live.

Created to protect the family’s shop from the rampant rampage, the Orb is far beyond what Orianna needs. It seems that the Orb has a unique will, and she always knows how to excel in everything that Orianna needs to do.

The Orb can scatter powerful energy, making the target stick to extremely painful energy waves. The sphere is linked to Orianna via Hextech link and controlled by mind. In addition, it can create an energy armor, and can knock out all enemies within range.

Rumble’s fighting machine was assembled from materials in a junkyard, upgraded and became one of the Yordle’s most powerful weapons.

Tristy is a combination of junk things, but has tremendous power and is packed with many features. Tristy’s power lies in the rear mounted missiles, with the ability to turn the ground into a fiery hell. Since it was a combination of a pile of scrap, Tristy was often in overload due to excessive use of energy, so a mace attached to the left arm was used in the case of malfunctions. .

There is no need to talk about quality due to the top talent professor Piltover. Heimerdinger was an eminent inventor with great inventions that made many people admire creativity and working spirit.

H-28G is not a fighting machine. It was just a minute of excitement and Heimerdinger’s childish love. He wanted to create an automatic ball-shooting machine so the children could easily have fun with each other all day. But when tested, the machine failed because the throwing force was too strong, enough to shoot a child. Heimerdinger left the machine on the playground and returned home to study how to improve. At the same time, a belligerent giant appeared, hurt many people, and Heimerdinger recreated the ball-firing machine into a powerful machine gun.

H-28G can fire continuously at the target without having to recharge. Unlike other guns that use bullets, the H-28G uses Hextech energy to create energy shots that pierce everything. In addition, after a certain period of time, H-28G will be charged to fire out a stronger energy flow.

Developed by the design of the Frontline Reconnaissance Aircraft, Corki first flew in and became his aerial friend ever since. The Fighter has joined Corki in the sky of Valoran, scouting and performing acrobatics.

Corki is not afraid of danger. In addition to being a pilot, Corki also knew how to edit her aircraft with a multitude of weapons, which people often guessed to be beautiful and not effective. Corki doesn’t mind that, because he knows what his “friend” can do.

In addition to the Hextech bullets that were fired like dense rain, Corki could also throw a series of bombs, causing explosions in enemy territory. Without stopping there, the missiles could be traced to explode the enemy