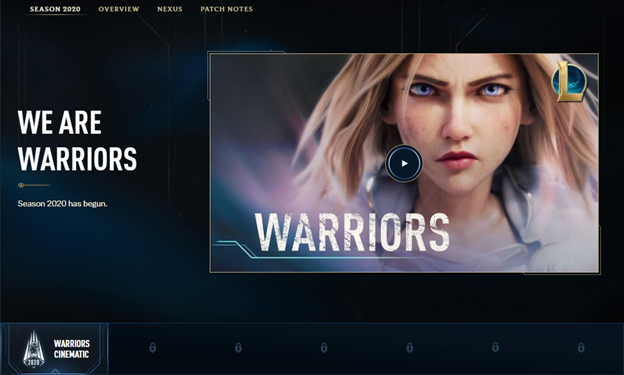 The client of League of Legends has always been rated by gamers as not very positive during the time since launch until now. Now that the 2020 season has officially begun, Riot Games is taking new actions for the login interface.

After the release of the short film Warriors, which introduced the 2020 season, Riot Games has taken extremely new actions for the client.

The locks, in order from left to right, show The Rift in 2020, Exploring Runeterra, Beta Season for Legends of Runeterra, Future of Teamfight Tactics, Sett Release, and Mecha Kingdoms event. On League’s website, it shows that one of these locks will open each day, revealing the information.

According to the home page of the North American League of Legends Forum, these six locks will be opened one each day, revealing the content that Riot Games wants to bring to gamers in this 10.1 version.

In addition, Riot Games also recognizes that their Client is currently degrading over time, they also announced will continually improve and upgrade this interface to minimize unexpected errors generated by completion. In turn, the goals they set: