League of Legends: What if the Practice Tool has a multiplayer mode? 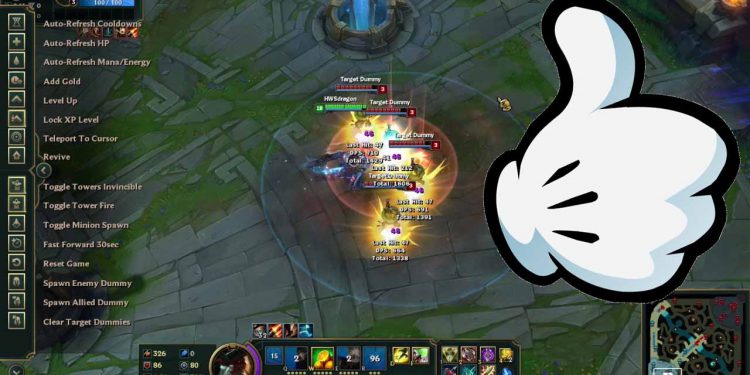 Practice Tool was born more than 2 years ago with the purpose of creating a private space for players to practice their skills. However, that is not enough. Although in the middle of the 9th season, Riot has added a lot of features to the place: time lapse, Summon Baron, or the increase of the enemy champion’s stats … Practice Tool is still not attractive enough for players who want to experience it real experience.

One of the things that the Practice Tool lacks most is the true interaction between Player and Bot. Despite being able to create the Doombots horror mode, the bots in the Practice Tool are still quite silly. On the other hand, having only one Bot and many other puppets around can make it difficult for gamers to practice combat.

One puzzling thing is that we can choose to add 4 other Bot together with us to fight 5 other Bot in the Custom mode, but we can’t do it in the Practice Tool!

So why didn’t Riot do that in a place where we should have been allowed to practice? And what if, along with that, we could invite other players into the Practice Tool with us?

And why not give players the right to try out all the champions in the Practice Tool, while being able to accept play a champion that has never been played in ARAM mode?

Playing with boring puppets makes the Union player community sometimes feel too far from a theory the interaction between player and bot, player and player in a place that is not divided high and low, without winning or losing … will make everyone learn a lot of things

If the Practice Tool becomes an ideal place …

You will be able to experience all the unique ways of building items before putting them into the game effectively, because you will be fighting in combat with bots with real stats – because you can adjust them!

You also won’t have to regret spending an amount of Blue Essence to buy a champion and then find out that it is not right for you – because you can go to the Practice Tool and experience them first! Riot will even benefit from this: the player will be much more excited to buy champions

And certainly, thanks to that, the number of players who “test skin”, “test champions”, “test build” … in the game can actually decrease.

You will also have a great opportunity to rub, cultivate, learn from the experience of the friend on the opposing team: They can be a respectable “teacher” when holding a certain champion and show the top combo to the scarecrow; or show you the classic mistakes when solo 1v1 …

There are many other things that players want Riot to add to this useful Practice Tool: change champions without escaping the game, choose the difficulty level for the bots, equip the items for the bot … But Riot is still quite ignore these ideas – there is definitely a reason

If these things happen, the Custom Mode is definitely removed: because if so, the Practice Tool only needs to add a button to enable the Win-Loss scoring mode to be too outstanding.

At the same time, many people will just want to go to the Practice Tool to seek out the taste of victory. Along with the pitifully low stats of the bots and the ability to stack gold, the URF effect will return, and players will leave other modes – only to enter the Practice Tool satisfy your desires

Riot also really wants players to learn by trying and failing – that’s really more meaningful and profound than putting gamers in a simulated room and battling fake things … For a long time, Riot has not mentioned updating the Practice Tool, despite the players shouting. Perhaps, more than anyone else, game developers understand the possible scenarios and expect the best to come to the players.