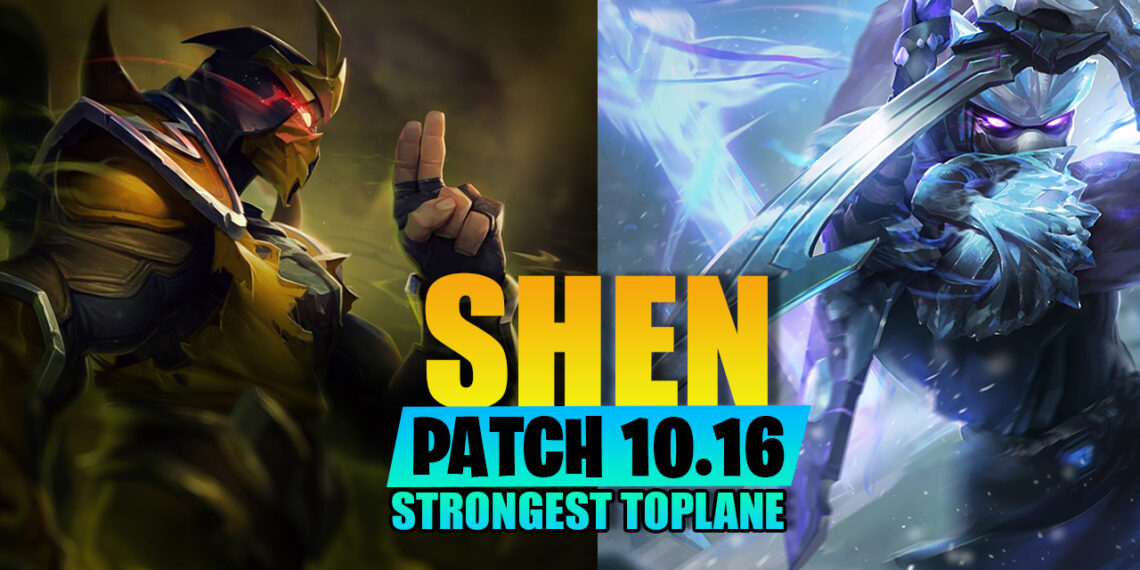 Thought to be an outdated champion, but Shen is coming back to be the strongest toplane champion in patch 10.16.

Shen has appeared for a long time in League of legends, he even considered to be one of the most important champion in big leagues with his brand skill “Stand United“. Even though Shen became obsolete as new champions were constantly being released, the strength of Stand United was gradually eroded due to the Teleportation spell increasingly popular over time. Shen was thought to be forgotten, but suddenly arise to be the most powerful toplane champion in patch 10.16.

According to U.GG, Shen is having a dream stats for a toplane champion, he is having a pick rate of 9,5% (Higher than Fiora, Darius and Jax), ban rate is extremely low bu win rate is 52,45%. Not only in terms of stats, champions that can counter Shen are very few, this champion can go from a draw to win with most opponents and ensure your team’s top lane has a good pressure.

Then what is the reason why Shen has become so strong? First of all, Shen was not buffed too much by Riot Games, but they were all important tweaks helping him being stronger in his laning phase, making Shen’s early trade extremely good. If you use Shield Bash on Resolve branch, this buff also gives Shen a fair amount of bonus damage.

Further more, the W – Spirit’s Refuge is Shen’s extremely powerful skill for duel, which blocks the opponent’s basic attacks completely. Remember that physical Fighters deal damage from both their basic attacks and abilities, Shen’s W literally block 50% of the opponents damage. Besides, it also protects allies as well, very suitable in 2v2 matches when 2 team junglers head up for a gank.

Another annoying point for those who stand against Shen in the toplane is they have no idea how to build defend items to thrive in the toplane. Usually Shen will go for Titanic Hydra as offensive item, so many people will choose items which can provide armour as defense. However, Shen’s main damage output skills is Q – Twilight Assault, which deal magic damage and the armor from those items become meaningless.

Even if you build health items, Shen’s can still deal a great amount of damage cause his ability interact with opponent’s max HP. In conclusion, when facing against a Shen, build defense items is meaningless, even if you build attack damage you still stand no chance against him, cause Shen was built to take damage and withstand it. Can be said that, Shen is an impossible math to toplane champions.

Moreover, Shen’s ultimate – Stand United is very easy to use and affect a combat immediately. With teleport spell, you need to pick a ward in a perfect position to force the enemy in the crab claw, which is rarely happen in lower ranks. Shen does not need that, he just simply use it on the team’s main damage champion to protect that one.

Shen has been the strongest champion due to the champion’s annoying playstyle, flexible in both laning and combat. Shen’s abilities are easy to use and newbie can get used to his abilities very fast. The only advise is that you need to war carefully from river to lane bushes incase you Shadow dash into an ambush 2v1.