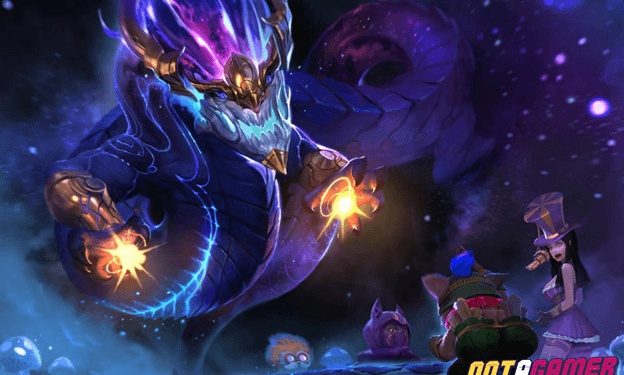 The person who came up with the idea and created Aphelios was – CertainlyT. It was he who created the generals like Yasuo, Zed, Thresh, Darius, Zoe …

So have you ever questioned what will happen when your champions will be CertainlyT rework?

In honor of the release of whatever the actual fuck that being from the depths of Hell was, CertainlyT decides putting the entire balance team on suicide watch wasn’t enough and decides to rework your new main. What crimes against humanity will he shove into their kit? Go nuts, because whatever you think of won’t be able to compare with the real thing anyway.

Top of Form Ryze will randomly become one of the old versions with the old skill set, thanks to a time-stone

This dragon will be able to use 362837 stars and will deal more damage when you hit more and more on the target.

In addition, her Q skill are proportional to the time of death, which means that the longer you die, the stronger Q will be.

Passive- Since Shen tries to create balance in Ionia between spirits and humans, he also does this within the game. If his team is behind in gold he’ll automatically gain enough gold to even it out. However if his team is ahead, he’ll take gold from his teammates and distribute it to the other team

Q- Can swap between his steel and spirit blade with steel dealing physical damage and spirit dealing magic damage. Also is a dash for some reason

W- Similar to his current w where he blocks autos, but this new w blocks all damage and abilities for himself and allies within the zone

E- A taunt dash similar to his current one, but doesn’t need to hit to taunt. All enemies in the area are taunted. Also makes him untargetable

R- Like his current R except he shields and teleports to all allies (including himself) and creates clones of himself by doing so. Those clones can also R until evetually the entire rift is overrun by Shen

When using W, he will make the player deaf.

Kha zix now can evolve recall so that it changes to teleport. Also his evolved R casts can be extended by each champion kill he gets (the extended casts are gone once the ult ends) , so if he kills someone while still not using every ult cast, he can cast it one extra time. If he kills 3 ppl he gets + 3 casts for total 5 casts (or 6 with evolved R). He gets a passive that allows him to stack DNA – every time he kills an unit he has a 3.14% chance of increasing his armor or attack dmg. Also he can kill his teammates coz fuck them, he is an alien isn’t he? Let’s devour everyone.

PASSIVE: When inside a bush, Vayne is able to see further than normal, removing some of the fog of war towards the direction she is facing while also revealing Camouflaged enemies.

PASSIVE: Vayne cannot normally land critical hits and as such, a portion of the crit she buys is converted into attack speed.

PASSIVE: Vayne gains 10 bonus movement speed when moving towards a nearby visible enemy champion that is not in the vicinity of an enemy turret. The bonus increases by 1 for every three Tumble casts in a game. Every cast of Tumble during the duration of Final Hour counts as three casts.

ACTIVE: Vayne dashes forward, though not through terrain, and her next basic attack within 7 seconds deals bonus magical damage scaling with her attack speed.

Tumble’s bonus magic damage will crit for 150% damage when used against an enemy stunned by her Condemn.

Additionally, during Final Hour turns Vayne invisible for 0.5 Seconds. When exiting stealth, two additional Vayne Clones will come forward That will be placed randomly and will simulate auto-attacking, but will deal no damage.

PASSIVE: Vayne’s basic attacks and Condemn apply a Silver Bolts stack for 3.5 seconds, up to 3 times. Attacking a new enemy removes all stacks from the previous target.

The third stack consumes them all to deal bonus physical damage based off the target’s maximum health, with a minimum threshold, and capped at 200 against monsters.

During Final Hour, Silver Bolts deal true damage instead while also extending the duration of Final Hour by 0.75 seconds.

ACTIVE: Vayne fires a heavy bolt at the target unit, dealing physical damage, knocking them back 475 units, and applying a Silver Bolts stack.

If the target collides with a wall, they take bonus physical damage, get stunned for 1.5 seconds. Additionally, Vayne is granted +475 range on her next basic attack against the Condemned enemy and will heal her for a portion of the damage dealt.

PASSIVE: Attacking enemy champions and structures that have recently dealt damage to an allied champion or structures reduces this ability’s cooldown by 1 second.

Condemn cannot be used against the same target for 4 seconds.

Automatically learned after leveling up every basic ability at least once

ACTIVE: For the next four seconds, Vayne gains bonus attack damage and all her other abilities are enhanced.

Q: True-true invisibility. Your champion, health, and mana are now invisible to you as well.

W: Boxes are now invisible even when they are procced.

E: Instead of throwing a dagger at the enemy, the dagger now throws you into the enemy.

R: There are always two Shacos in the game, one on each side. Press R to switch between them. You don’t know which team you are fighting for until the 30th minute or the second Baron. Your goal is to make the match as competitive as possible while keeping yourself fed, until you know which side you’re on.

Q: Extended range by dragging the mouse. You can use Q on a full map scale.

R: Detonate on the entire map and destroy all female champions.

His passive is like ignite. It stacks up to 5 times dealing a lot of damage over time. If he gets 5 stacks, he gains a huge amount of attack damage for a few seconds, and during this time any attack he makes on an enemy inflicts them with 5 hemorrhage stacks instantly.

Q strikes enemies in a circle after a short delay, enemies at the outer part of the circle take more damage and apply hemorrhage

R This is where it gets interesting. Darius’ ult deals true damage people, and the hemorrhage stacks they have on themselves (max 5) determine the amount of damage it deals. If he kills people with this ability, it resets, allowing him to use it again. If an enemy hasn’t been killed in the past 20 seconds it goes on cooldown. However, at level 16 it unlocks. This means that his ult takes no mana, and won’t go on cd after you kill someone, even after 20 seconds.

Passive resets your cool down depending on the eclipse of the moon, if it’s a full moon you get your cool downs back instantly , half moon only 50%,eclipse ? No passive.

Her Q , the same but gives % health DMG when she throws left dagger. (Throws left or right randomly ) and a 20% slow if she throws the other one.

W preparation same but also, depending on which knife she throws she can either set the w for DMG and 15% movement speed increase over 4 sec , or set it as a trap that roots the enemy champion dealing AD scaling DMG.

Her E stays the same , but gives MR scaling shield on the weekends and during Holidays including Hannukah.

Her R throws around her 6 daggers she can jump to, but one of them is a trap and will not reset your cool downs cause fuck you.

Lux – The Priestess of the Sun

Marked enemy champions hit by any of Lux’s abilities take %True Damage based off of her Mana:AP ratio, divided by her AD and multiplied by 75% her Magic Pen.

Lux shoots a ball of light straight in front of her.

The ball can pass through as many enemies and minions.

on the return trip, the first champion or minion hit is rooted for 0.5s

Lux launches a ball of light at a target location (global) after 0.3 seconds the ball explodes.

Enemies in the ball as it explodes are blinded and take AP damage.

Lux shoots a beam of light in any direction

If a champion or minion are shielded by Lux’s W, the beam reflects in the direction they are facing (the original beam continues in the same direction)

Friendly champions hit by the beam are given Incandescent Light for 1 secs.

Enemies killed by Prismal Flare reduce the cool down of all of Lux’s abilities.