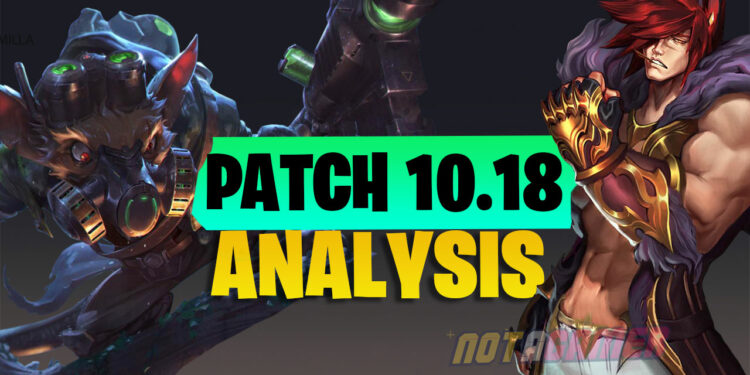 Patch 10.18 will see a huge scaling nerf toward Guardian keystone of the Resolve tree, Sett and a major change to Ahri’s kit. Twitch will receive a major buff to his late game. Aside from that, only a handful of changes are about to be introduced this patch

Imagine you are an assassin, happily unloads all of your stuff on the opposing ADC, tags your Ignite summoner spell on his/her head and watch as your victim’s life slips away. You grin in satisfaction only to see that darn Thresh throws a lantern with a gigantic shield absorbing the entire Ignite damage. You smash your keyboard as you invested everything you have only to gain nothing thanks to the colossal Guardian shield.

This problem is further amplified when Thresh has natural AP gain from his passive while building HP as well, making the shield highly potent on Thresh. As such, the scaling on the shield is nerfed by a hefty amount, but this shouldn’t affect enchanter supports a lot since they mainly build heal and shield amplification items, not health and AP.

Another strength tuning down cast upon the Boss himself as despite after having bludgeoned with the nerfhammer plenty of times before, the mommy loving Vastayan still proves to be a force to be reckoned with, either as a Support or a Top Laner. Therefore, Riot will now hit what makes him strong the most – his base damage.
With his base damage getting greatly slashed away, it is no longer optimal for him to build full defensive and still smacks the opposing carries to death. Items with hybrid attack damage and defensive properties such as Sterak’s Gage and Death’s Dance will work best for him after patch 10.18 is out.

A slight nerf for the early game, won’t hurt neither her scaling or the notorious utilities that she offers, namely the global stun and free vision that can screw up the opposing team’s jungler by revealing his/her pathing.

Shen is being notoriously known for his oppressiveness in the early game which rivals even Darius himself, thanks to the previous buff to his passive. Now Riot decides to take it back.

After a rather long period of being relatively untouched, Galio’s gust base damage is getting a slight reduction. This should not affect his overall performance once the laning phase has ended.

Kog’Maw has been a little oppressive right from the early game, especially when paired with Lulu thanks to his high range and bonus magic damage on his W. This should make him squishier, therefore he would be more vulnerable to all-in, forcing him to play more passive early on, which fits his intended design. His overall prowess will not likely to be affected once he got several items, however.

These changes, despite being listed as a buff, it’s more likely a nerf to her stats and a buff to her reliability and ease of access for newer players. Some of her stats get nerfed, most of the buffs are gearing toward improving her reliability, rather than directly buffing her strength. Still, with glacial augment and that guaranteed to hit charm strategy, Ahri will still remain an annoying champion to deal with on patch 10.18.

Removing Q mana refund on-hit means that it is not possible to poke the enemy laner while pushing the wave any more, and it’s doubtful whether the E being a free mana cost ability would compensate for the hefty raise on her W mana cost.

However; the increased E missile speed would certainly help her in executing a champion with the ability, also it would be good for her once she gets plenty of attack speed, making it feel more consistent with her attack pattern.

Being an early ganker that transitions into a tank later on in the game, the 10 added damage would help him quite a bit in clearing jungle camps – and ganking lanes. Other than that, don’t expect lethality Jarvan to be a good choice in ranked in patch 10.18.

Although this looks like a tremendous buff to the Mechanized Menace when Q is maxed out, it should be noted that the strength amplification can only be felt if the entire brunt of Q is sprayed at the target, but it’d make him to climb to a better spot regardless, since he’s definitely not in a weak position at the moment.

A revert of the two nerfs on 10.3 and 10.10, it is expected that Critical Strike Chance Miss Fortune build will become the dominant path once again. The out of combat movement speed helps a lot in traverse the map to either regroup or farming side lanes.

While the AP ratios buff does not really matter much even if the users try the AP Twitch for the Ultimate Bravery challenge or running Guinsoo’s Rageblade, the ultimate buff for the Plague Rat is definitely something to behold. The minimum damage increase means that Twitch’s AOE damage in a teamfight will be more disgusting than any ADCs in the game once Runaan and a few other crit items are built.

It is expected that Twitch’s win rate will increase substantially in patch 10.18, especially in longer games where he can go past his weak laning phase.

A significant buff to his W, Xin Zhao has been an underwhelming jungler for the last few patches. This buff will incentivize Xin Zhao players to land both of their W (preferably when the target is being knocked up with his Q)

It is expected that he will become a favorable pick on patch 10.18.