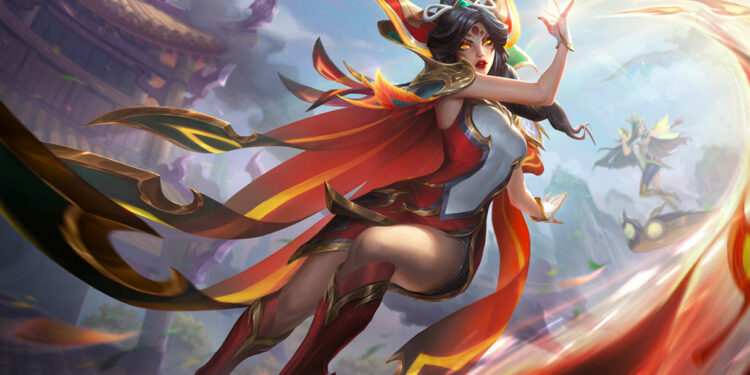 Also, the nerf scheduled for Pyke in League Patch 12.8 has been moved to another patch.

The official balance for MSI 2022 official version is here in League Patch 12.8.

If you’re sick of the current bot lane meta in League of Legends, you’ll be relieved to know that a couple of the game’s most powerful picks have been adjusted for League Patch 12.8.

Pyke nerfs that were planned for this patch have been relocated to a later version. However, the devs have adjusted Xayah, Jinx, Soraka, and AP Kai’Sa, which may allow other champions to flourish both in single queue and at the 2022 Mid-Season Invitational. The event begins in three weeks, and League Patch 12.8 has been announced as the version on which professionals will participate.

First, Jinx faces a base health decrease, dropping from 610 to 560 HP. This could assist her opponents penalize any ill-timed skirmishes because she’ll have to exhaust her potions faster or return to base sooner. Xayah, on the other hand, is getting a late-game nerf to her Q damage that increases by five at each level. At higher levels, the cooldown also increases.

League Patch 12.8’s nerf hammer is also causing havoc on Soraka, notably the healing on her Astral Infusion. From level two onwards, healing is lowered, with the maximum level heal reduced from 240 to 210. The AP ratio on ability is also being reduced by 5%.

Anyone who has faced up against a powerful Kai’Sa with AP will know that her poke can be almost difficult to cope with, especially in the absence of some type of healing or lifesteal. Worry no more, because Riot’s W damage has been reduced from 70 percent AP ratio to 45 percent. To compensate for this loss of power, the developers are raising her passive damage and the AP ratio of her ultimate ability, so she isn’t solely reliant on landing her poke to perform the majority of the damage.

The General’s new ‘drain tank’ fantasy has come true with a reworked ultimate that can potentially persist indefinitely in a teamfight, but he has given up his ability to drag any foes afflicted by crowd control. Even so, we may witness the growth of Swain in solo queue as solo laners begin to experiment with him.

Along with the slew of buffs making their way to live servers, League Patch 12.8 should add some variation to today’s meta. When MSI 2022 begins on May 10, keep a watch out for any returning champions who enter the Summoner’s Rift.