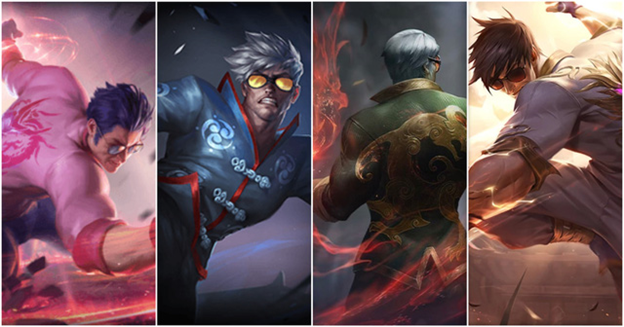 As a publisher and owner of League of Legends, Tencent has brought many incentives for Chinese gamers – exclusive Lee Sin is a great example.

There is the fact that many gamers will notice that in League of Legends, there are still costumes designed by Riot Games based on the typical culture of some countries, such as Uncle Ryze (USA), Dynasty Ahri (Korea)… For China, the typical skin for this biggest region of League of Legends is not the Lunar New Year skin line, but its Lee Sin Dragon Fist.

This costume is inspired by the legend of Bruce Lee – The star of martial arts action movies that the Chinese are always proud of. But more importantly, with the “privilege” of being both the Publisher and the owner of League of Legends, Tencent has adapted many changes only for the Chinese region (such as changing the foreign language). Pictures of some generals associated with “skulls” and “blood” to suit the culture of this country). The Chinese League of Legends recently continued to amaze the international community when it released a series of splash-art separate for each of the many colors of the Lee Sin Dragon Fist costume.

In other words, for just a small amount of money to buy a Polychrome, Chinese gamers will receive an item pack equivalent to a complete skin, including a new character appearance, splash-art, and loading screen. Of course, this special “offer” is only for the Chinese League of Legends server.