[Legends of Runeterra] Forces from Beyond – amazing expansion coming 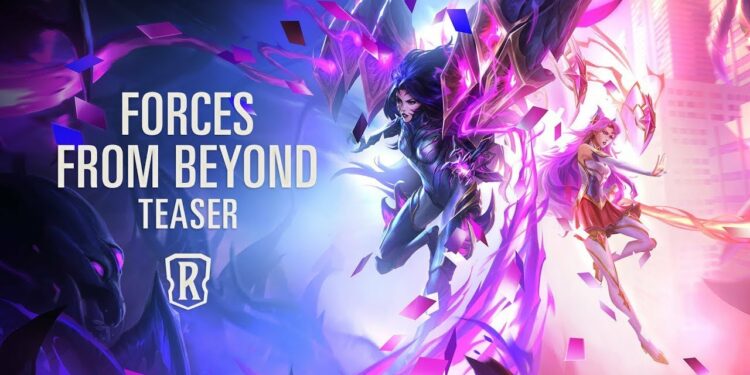 Forces from Beyond is the next Legends of Runeterra expansion, which is expected to be available this month.

Legends of Runeterra: Forces from Beyond will be released by Riot later this month. Before that, Riot released two expansions in 2022 (Curious Journey and Worldwalker). Here is what we currently know.

Forces from Beyond – Trailer

You can watch the first teaser trailer for the game, which features some cards with masquerade ball themes and our new Champions here:

The release of Forces from Beyond is scheduled for July 20 and, based on previous expansions, is expected to occur around 11 AM PT/7 PM GMT.

Forces from Beyond will be free to all players, like with other LoR expansions, but you’ll have to unlock cards as you play.

Gwen, Evelynn, and Kai’Sa are the three new champions who will be joining the Legends of Runeterra: Forces from Beyond

The unveiling of Kai’Sa reveals that she starts with a 5 cost, 4/4 card and possesses the Evolve keyword. She has a Quick Attack as well.

Gwen, a 3/4 card with the new keyword “Hallowed” and Quick Attack, levels up when she deals more than 10 damage.

All new cards coming in this expansion could be found on Mobalystic.

Players may anticipate encountering a variety of eerie Husks as well as a number of unpleasant partygoers, such as the Boisterous Host shown below.

The powerful rulesets that define specific cards in the game have been expanded with new keywords with each expansion, and the Legends of Runeterra: Forces from Beyond expansion is no exception.

Found on Kai’Sa, this keyword has the following description:

“I have +2 | +2 once you’ve given or summoned allies with 6+ other positive keywords this game.”

Gwen has this keyword, and it is described like this:

“After I die, for the rest of the game when allies attack, hallow your first attacker giving it +1/+0 that round.”