Legends of Runeterra: Overview of 6 areas in the game – Champions & Play (Part 1) 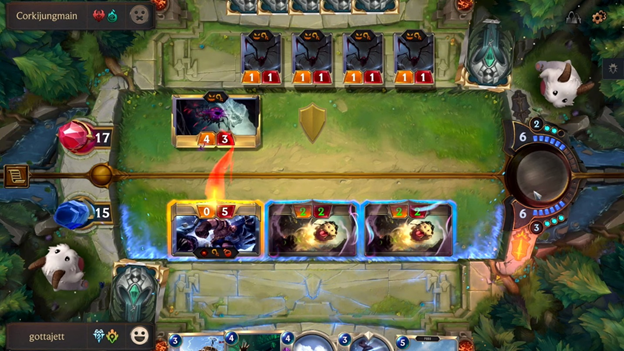 Join Demacia’s ranks to lead the army of justice. Challenge enemies to a duel, gather loyal soldiers and call for reinforcements to win.

Demacia’s gameplay revolves around building an army of units that can buff each other. This area allows you to influence the flow of the battle by forcing enemies to fight.

Demacia relies on its numerical powers and strengthens its allies. This gives an advantage in the skill swap and allows you to make big blows to kill your opponents if they are not defensive.

Cards like For Demacia! and Cithria the Bold can make your weakest units a serious threat and turn your main units into destruction machines.

Barrier cards such as the Brightsteel Protector and the Prismatic Barrier provide a shield that eliminates the first damage a unit takes in a round of combat. It allows you to protect the units you buff and the champions you need to help you ensure victory conditions.

The champions of Demacia

Capture the wild and icy beauty of the Freljord. Attack tribes, tame monsters, and command the tundra to remind your enemies why you continue to survive longer than any civilization.

The Freljord uses crowd control effects and mana ramp mechanics to end the game with powerful late-game threats. It has the largest unit in the game.

The ancient Freljord helps you harness the mystical power that allows you to increase your mana and excel with cards like the Wydring Stones and the Catalyst of Aeons. You can play large creatures earlier than normal to really put pressure on the opponent.

The champions of the Freljord

With magic and nature to bring peace to the sacred land of Ionia. Use your skills and ingenuity to defeat the enemies in the battle of wits and kill them before they see you coming.

Ionia has a complex mechanism that allows you to fight your opponent with sneaky and magical tactics.

Ionia did not fight directly with her opponent, and instead, overtook them with stealth tactics. Recall allows you to bring units back to their owners (similar to Rogue if you’ve played Hearthstone).

Minah Swiftfoot returns 3 enemy units and opens the way for your attackers. It interrupts the flow of your opponent’s gameplan because they have to use more mana to replay their units.

Ionia is the land of ninjas like Shen, Akali, Zed and Kennen. Elusive ability reflects this feature because it allows you to attack opponents.

Elusive units cannot be blocked by non-elusive units, so your opponent will often need to use magic or other means to destroy them. Windfarer Hatchling has Elusive, which also benefits from Ionia’s Recall effects, as it can buff allies whenever it is used.

The champions of Ionia