LilyPichu got to voice-acting as Master Yi’s follower 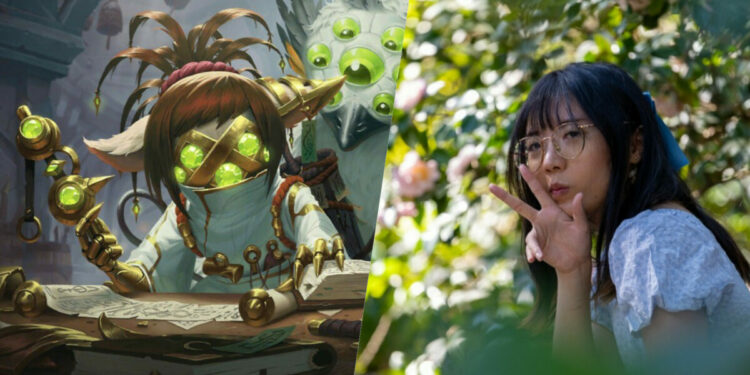 Lily “LilyPichu” Ki, a YouTuber and OfflineTV member, has been playing, streaming, and producing League of Legends material for more than ten years. She is currently recognized by Riot Games as a voice actress.

She revealed that she is the voice of Disciple of Doran in the League of Legends strategic card game, Legends of Runeterra, on her Twitter account as she celebrated this professional milestone.

Lily’s character appears in exclusive interactions for the Worldwalker expansion set, which was first made available on May 25, in the game’s patch 3.14.

LilyPichu essentially portrays a modest member of the Wuju Order who stands in support of people like Master Yi and her immediate boss, Doran. Master Yi requests Disciple of Doran to fix his distinctive helmet, which Doran initially created, in one of her voice lines and interactions.

In the Worldwalker deck, the common card Disciple of Doran depicts Lu, a devout disciple of Master Doran. Doran, the master of Yi as you would have guessed, is also the designer of some of League’s most well-known in-game equipment, like Doran’s Blade and Doran’s Ring.

Both Lu and Master Yi engage in the Art of Wuju, which is based on the idea of achieving complete spiritual awareness of oneself and one’s foe, in Lord of the Rings.

Here you may hear Lily’s voice lines from Legends of Runeterra:

Lily began her career as a League of Legends content creator before moving on to become a well-known voice actress. She is well-known for her parody songs “I’ll Quit LoL” and “Do You Want To Give Me Blue Buff?” She cosplayed various of Lux’s skins, including Academia Lux, because she is such a huge fan.

Riot Games published a sweet doodle of her dressed as Star Guardian Lux in July to honor her ten years in the business.

In the open-world role-playing game Genshin Impact by HoYoverse, Sayu, a 4-star Anemo, is voiced by Lily. She also contributed to the anime films “Belle” and “Don’t Toy with Me, Miss Nagatoro.”