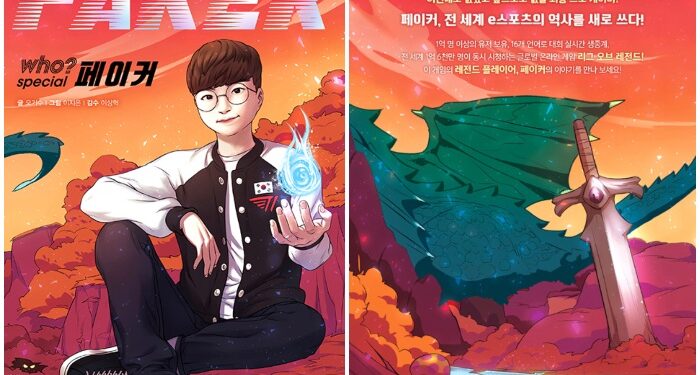 Faker‘s fans have been looking forward to this.

Considered the greatest LoL player in history, Lee “Faker” Sanghyeok is reaching the next level as the first gamer to be included in a comic as the main character.

The comic, titled “Who? Special: Faker” was recently revealed in Korea and gathered great interest from fans of the “Demon King”. It will be published soon.

“Who? Special: Faker” is expected to be released in Korea on 7th December. As of now, a few websites have accepted preorders of the comic. The expected price is around 14 thousand wons (roughly 12.7$ USD). We are not sure will this comic be available in another country since most websites that cover or sell this comic are all written in Korean and it looks like this Comic now currently only having a Korean language version (like this one).

The comic tells the story of Faker’s life and career, from childhood to elementary school and high school, and to his path to professional LoL gaming. The comic not only focuses on his great League of Legends career but also explores themes such as the relationship he has with his family, his loved ones, and his friends. With a cute and bright art style, the comic has received great support from fans since teasing a few pages.

Besides his life, the comic also tells the founding history of esports in Korea, the rivalry between corporations, and the strict factors of becoming a professional gamer/player.