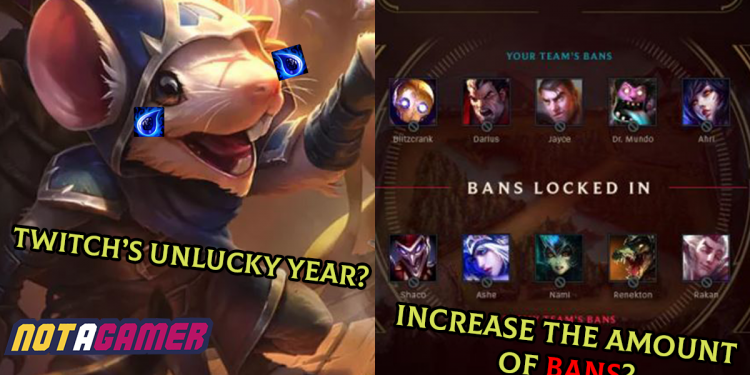 Increase the amount of bans?

As we all know, the number of champions coming into Runeterra universe is increasing rapidly, the new meta is getting more diverse, champions now intensely counteract each other in some ways. Specifically, these new champions like Neeko, Yuumi, Zoe, along with their counter picks like Darius, Syndra, Lissandra are accountable for creating new meta for the game.

For example, the top laners were gladiators, who are capable of charging into enemies like Darius, Renekton but now there are appearances of Soraka, Ryze, Pyke on the top lane which made the game more diverse. There are so many options for picking what type of champion, which champion to play. Of course, the game still mainly depends on the skill of players, but in high-elo matches, winning or losing is sometimes decided by the ban/pick phase. That is why some players are suggesting Riot to increase the amount of bans in the ban/pick phase.

For practical purposes, we all know that there are too many champions who can easily tear you apart and 1 ban is never enough. This problem also occurs regularly in competitive matches. For that reason, this change might be a bless or a curse for your gaming experience, so what do you think about this issue of banning more champions?

If you think that Jhin is an abandoned marksman for receiving a special gift from Riot on his 4th birthday, think again – because Twitch is more pathetic this year.
In previous years, whenever the Lunar New Year came, the mascot champion representing the Chinese zodiac of that year would be given a skin to celebrate the Lunar New Year. Surprisingly, in the Year of the Rat – 2020 – the year of the Rat – Twitch… received nothing.

Moreover, the bug of Dark Harvest when playing Twitch slipped everyone’s mind. Since patch 8.24, when Liandry’s Torment no longer triggered Dark Harvest’s effect, neither did Twitch’s poison. If you were attacking an enemy that is below the Dark Harvest’s threshold and waiting for Twitch’s poison to collect the harvest stack for you, the keystone would not work, no matter how long you wait.

Two seasons have passed and it seems that the rat is still living in the dumping ground. Being ignored this much, he will never be able to dominate the game again, even in the year that he should have been enthroned.

No wonder he spread the plague right on the very first months of the year.

As we all know, we calculated the year by using the terms “Before Christ” (B.C) and “Anno Domini” (A.D). Specifically, the years after the year 0 which is at Jesus’ birth, we call it A.D, the years before that time we call it B.C. The time in Runeterra is calculated with the same concept. Year 0 is set when The Noxian Empire was founded. So, the years before that time we call them the years Before Noxus (Example: 5000 years Before Noxus, the Warriors…), the years After Noxus is calculated as the same way we are calculating in real life.

So why Noxus and not Demacia or Piltover? Let’s return to the year 400 Before Noxus, when Mordekaiser was still alive with the name “Sahn-Uzal”. He wiped out the tribes across the continent of Valoran to build an empire as well as The Immortal Bastion with the blood of the the ones who used to confront him and that place is known as Noxus nowadays. However, as time went by, when Sahn-Uzal’s mortal body died out, his empire was abandoned and those who followed him left the place.

When the Rune Wars took place, devastations covered the entire Runeterra, a group of people from a certain tribe took refuge in The Immortal Bastion to avoid the enemy’s magic. When the war ended, they rebuilt the abandoned empire of Mordekaiser, made it their residence and renamed that place as “Noxus” based on the old name of their tribe. It was this time that Noxus was founded which set the year 0 right at that moment.

The Noxian Empire gradually grew and expanded into many different territories before other nations were founded (Demacia was founded 292 years After Noxus and was the second most powerful nation in Valoran after the Rune Wars). Because of Noxus’ significant influence, most of the later founded nations including Demacia are still using the Noxian calendar until now.