More than 10 years ago, Nashor used to be what turrets looked like in the alpha 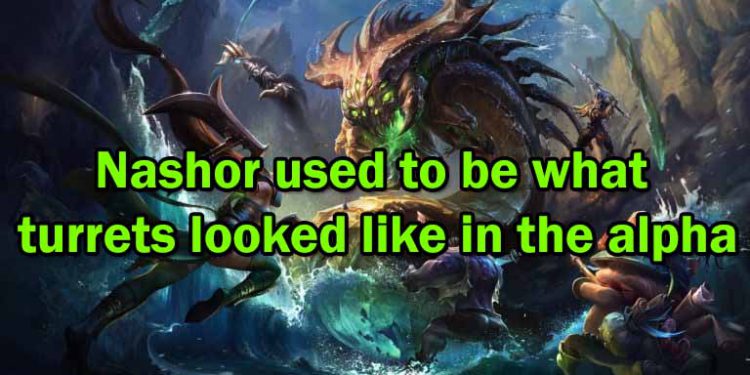 League of Legends has come a long way with more than 10 years of establishment and development. Also during this time, Riot Games created a lot of new champions, unique items and skill effects bearing the identity of the League of Legends.

However, it is hard for the early League of Legends players to know all the interesting secrets. Especially in the period of this game is still in the development stage, testing many different things

One of them was unearthed by a Reddit account with an article titled – “TIL: Nashor used to be what turrets looked like in the alpha”. For us, getting used to Baron being a terrifying, scary monster is hard to imagine Baron was once offered to Riot as a prototype for Nexus so that both the Creep and the Champions rushed in … beat.

However, in the Alpha Test, this happened.

Specifically, according to the guy mentioned above:

Basically during the early alpha, similarly to Dota and HoN, the two teams weren’t identical but there was a good side and a bad side: “Order (equivalent of Sentinel/Legion/Radiant) and “Chaos” (Scourge/Hellbourne/Dire).

As it happens, the model that ended by Baron Nashor was used for the T1 turrets for that side of the map. Just thought that was interesting.

It’s a little closer to how Dota used to be, where the turrets were living things that spat missiles at you.

As you can see, Baron will be the base of the chaos, taking the form of a monster to spit fire on the champions.

It can be seen that League of Legends has made an incredible transformation after 10 years of development, the Baron Nashor has to be a turrets, only Riot Games can think of it …

And how do you feel about League of Legends, please leave a comment!