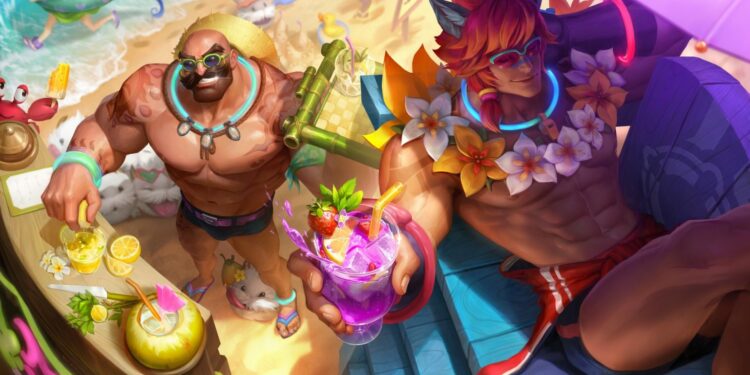 As League of Legends players prepare for a jam-packed season, it’s almost time for brand new summer skins. Pool Party skins will be given to two characters in 2021. This time, Sett and Braum are the lucky winners, and they are able to relax and soak up those sun-rays.

These are the first two skins teased for the Pool Party skin line for 2021. Previously, multiple characters had skin previews at the same time. It’s uncertain if more skins will come out this summer. Pool Party skins for 2021 are expected to arrive on the PBE shortly after MSI concludes. Sett and Braum are the ideal duo for this year’s skins because they are eager to take the battle to the front lines in their brand-new swim trunks.

In-game, both Sett and Braum are tumbling off the Summoner Rift with tons of new and eye-catching abilities, colored with sand, splashed water and cheerful sun.

Eventually, these two mounds of muscles are a fantastic addition to the Pool Party collection. The two skins will be ready for testing on the PBE servers soon.