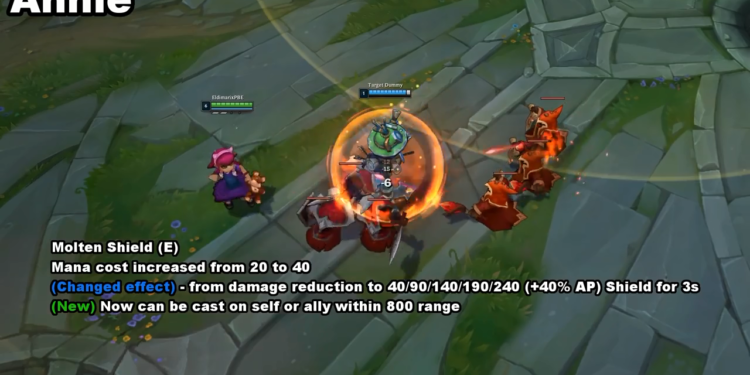 Let’s take a look at some pretty interesting changes we’re going to be seeing on some champs on Patch 10.22. These aren’t just your average buffs or nerfs, they are complete adjustments to how these abilities work. This also isn’t the full list of champions being buffed and nerfed, but these are some of the biggest changes being made.

Annie’s E will no longer give damage reduction, instead, it will shield for 40 to 240 with an additional 40 AP scaling, the mana cost is being doubled from 20 to 40. But the really big change is that it can now be cast on allies up to 800 units away.

What does this mean for Annie? Well, the target of these changes is to open up Annie’s support, but with such a big AP ratio on the shield and no mention of the damage reflection being taken off, it just seems like it’ll be a really big buff to any mid lane. It is pretty sure that Annie’s support will also come back into style or at least be more viable, but when you have a 700 AP Annie mid, that shield will be so thick.

His Passive explosion is having its max HP base damage go from 12 to 16 base + 1.5 % AP scaling to 10 to 14 plus 2 per 100 AP. This change is simple and is aimed at weakening the baseline power in his Passive, but making it much stronger once you get to that laking full APbuild.

His E now spreads always, without the prerequisite of having the blaze debuff on your targets, E’s spread range is being lowered from 375 to 300 but if the target is already ablaze the range is doubled to 600. To put that into perspective, that’s Ash’s auto attack range. This is a pretty big change when it comes to wave clearing and you want to use your W on targets that are already blazed since it does bonus damage.

This means you have to use Q first to get blaze on a single minion, E to spread it and then W to finish off the wave. With this change, you can just scoop up the minions and do the job with the simple E W combo. This along with the Passive buff are targeted at making Brand much stronger as a midlaner.

And lastly, Brand’s R can now bounce off Brand himself. For those times when you’re bursting down a single target, this is huge.

Nasus is getting his alt bonus resists going from 15 to 55 up to 40 to 70, but will no longer gain extra resistances per second. So even with this R going to max duration at rank 1, that’s a buff from 30 to 40. and it’s all available the second you press R. Only when you’re dealing with lane boys like Renekton, Garen or Rumble you can’t really afford to wait 15 seconds for a ramp-up. At rank 3 you do get more stats upfront, but after 5 seconds of vaulting, it’s less effective but being that Nasus is most vulnerable in the early game. That trade-off is super, super worth it

Jinx’s E-traps now deal full damage immediately instead of over 1.5 seconds. This change is maybe not really aimed at buffing or nerfing Jinx but is more in line with targets of modernization and satisfaction that Marky had tweeted about. But this could technically be a  slight nerf to Jinx because she gets excited Passive isn’t technically just takedowns but rather champs being damaged by jinx in the last 3 seconds.

The damage from her chompers going from a damage over time effect to all the damage being up front, means that there may be some cases where she doesn’t get excited off of an enemy dying. Say an enemy flashes away and is killed by someone other than Jinx exactly 4 seconds after hitting her flame chompers. In that case, she wouldn’t be getting her passive, where with the way it works now she would. Again this would be a very rare occurrence and it does make a lot more sense for a grenade’s explosive damage to be all up front, and not a damage over time effect as if it were being burned by flames.

So what do you think about these changes? Please let us know by comment on the section below.

Thanks for reading and have a nice day !