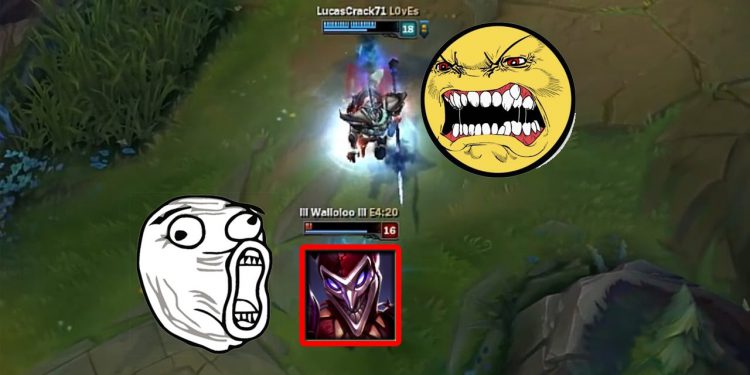 Indeed, the system of denunciations and sanctions of Riot Games are frustrating players when players who deserve to be ban are not hurt at all…punishment from Riot Games

The accusation system of League of Legends is considered as an extremely advanced feature when it helps the publisher to know and handle cases of players who have a negative attitude.

However, this is only a theory, in fact, this Riot’s accusation system has almost no effect when there are too many cases of AFK game-breakers, intentionally dead or have negative attitudes. What punishment for this?

And most recently, the player discovered a true game-breaker when he deliberately AFK and then on the troll team.

Perhaps if this player does not appear on the stream of the streamer IKeepItTaco, a boy one champ Jhin on North American servers, then probably no one knows him. Starting from being caught oddly then this guy kept swearing at the mid laner and finally…troll team and AFK always at the Nexus

And when people find the history of this guy, it is really stunning when he AFK, breaking the game in his last 7/10 matches.

It is not known what type of Riot’s punishment system is working when the prime gamer knows how many times these bad attitude components, but they do not receive any punishment.

After this case was shared on Reddit, a lot of people agreed and expressed their opinion that Riot Games should improve its punishment system.

It never happens that such game-breakers can still play League of Legends normally, this situation really makes the game experience of other gamers greatly affected.

Riot should put more attention on the report system

The best thing is that they use the time and resources to develop the God of Fire instead of improving the game experience. How much RP do I have to use to have a better system instead of just going to school to swear at young people?

You should consider buying RP

You see, you can only get banned if toxic and scold on the chat frame

Not really, you only get banned when you say outrageous words, toxic is okay.

Perhaps Riot Games should pay more attention to the development of sanctions against game breakers as above, the game experience is very important and it helps gamers decide whether to play this game or not… If the state of breaking the game is still messy like this, then true gamers will eventually become toxic youths.