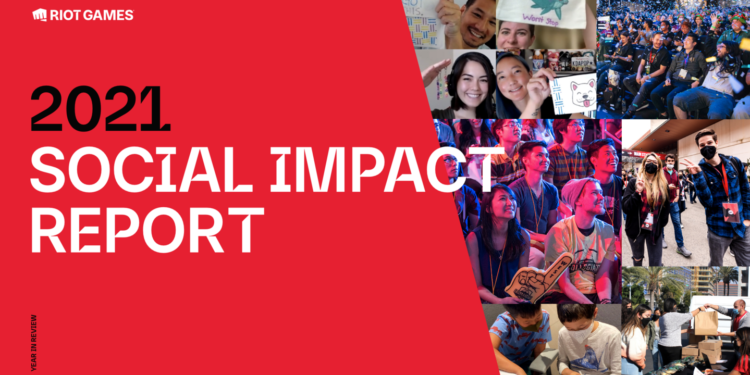 Riot Games has released their 2021 social impact report. The company’s main goal was to assist charities in building resilience

Riot Games is assisting with the current global epidemic by hosting a number of events to help research vaccinations and create centers. However, with so many other efforts getting underway, let’s take a look at the company’s activities in 2021

According to the report, in 2021, Riot held Sentinels of Light, its largest in-game fundraising event in the League of Legends universe to date, where players raised $5.8 million for the Social Impact Fund and 30 nonprofits nominated by players from 18 different countries were chosen to each receive a $10,000 prize.

Valorant, one of Riot’s titles, also held its first in-game fundraiser, generating $5.5 million through Give Back Bundle purchases.

The debut of its Wild Rift mobile game, the premiere of its award-winning Netflix television program Arcane, and its largest in-game charity fundraising to date all contributed to the company’s successful year.

Riot gained notoriety for its charity endeavors. They received their second Golden Halo Award from Engage for Good in 2021 for last year’s Dawnbringer Karma in-game fundraising, and Riot was recognized to the 2022 Fast Company’s World Changing Ideas List for the 2021 Sentinels of Light in-game fundraiser last month.

Collaboration with the White House and the US Departments of Health and Human resources was also seen to raise vaccination awareness. PSAs were created for esports broadcasts, reaching over 1.5 million unique viewers.

Riot contributed $500K to help curb the spread of Covid-19 in the United States. They assisted in the establishment of nearly 30 vaccination stations in places where access was limited.

Riot not only assisted people, but also encouraged their gamers to give back to the community. Riot mentioned that they help others in order to “be the world’s most player-focused game company.”

Even though the company is criticized frequently by the League of Legends community for their recent RP raise and the Mythic Shop Rotation, there’s no denying that Riot is leading themselves into a peak that no other gaming company can reach.