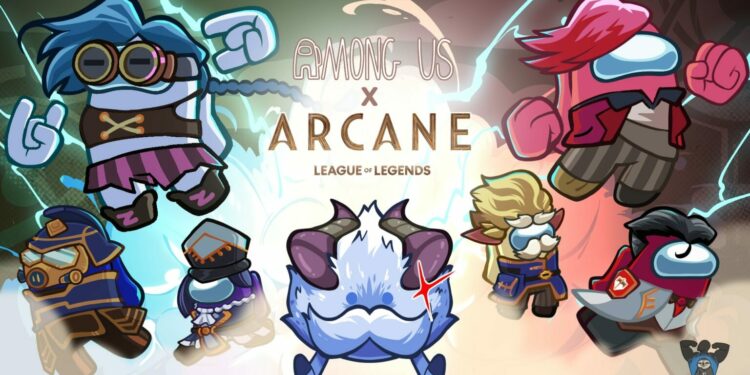 Riot Games and Innersloth have announced a groundbreaking partnership between their popular games League of Legends and Among Us. In the multiplatform game, themes inspired by League of Legends’ animated series “Arcane” will be featured.

On Nov. 7, Riot Games hinted at a collaboration with Among Us, and just recently, Innersloth revealed all of the new cosmetics that will be arriving in the game. In a multiplatform game Among Us, the theme inspired by League of Legends’ animated series “Arcane” will be featured.

As Among Us collaborates with Arcane, you’ll soon be able to dress up your favorite characters in Runeterran style. The collaboration will introduce champion cosmetics to the Among Us franchise, depicting characters from the show. This will be the first in-game collaboration for Among Us since its debut in 2018.

The Arcane package, titled Cosmicube, will unlock a variety of goods, including hair, pets, and clothing inspired by League champions, but only until December 31. Cosmicubes are a new feature to Among Us which consists of both paid and free unlockable cosmetics. By enabling one, players will receive Pods, which can be used to acquire cosmetics in-game.

Apart from cosmetics for League champions, the package will also include enforcer-themed items including Jinx’s explosives and Claggor’s goggles.

In the upcoming updates, the following characters from the Arcane series will receive their own skins and cosmetics:

The following is a complete list of cosmetics available to players:

Until December 31, the Arcane Cosmicube will be available for purchase in-game.