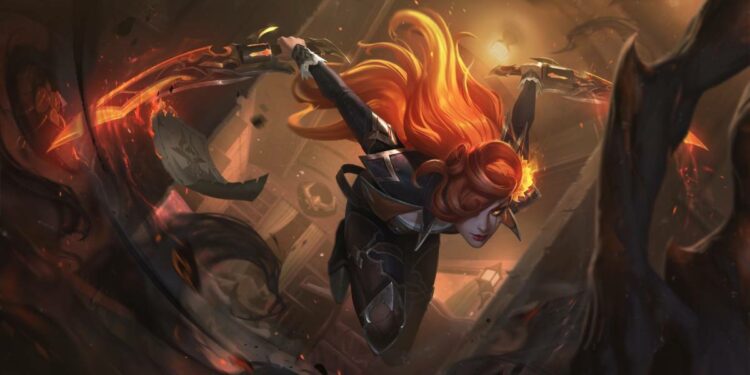 League of Legends’ ‘Wild Wild West’ world has been around for a long. It’s an alternate universe located in the desert, with each champion being a ‘western’ hero. This time, Katarina, Leona, Mordekaiser, Talon, and Varus are all entering the High Noon realm as part of the skin line. The skin series has always been popular among fans, and it appears that the skins are becoming better with each generation.

Leona will be dressed in a black and white gown and her hair will be styled in a white bow. Leona will be the only Legendary skin being released this time.  When she triggers her Eclipse, her massive shield bursts out into a butterfly shape. Her recall is also unique, as she calls out, or summon, a white war-horse that rides her back to the fountain.

Katarina’s fire hair stands out in her own skin, and she’s armed with scorching twin daggers. She appears in her own pristine clothes, leaping from one enemy to another.

Varus and Talon will be sharing one splash art. Both are stunning young men dressed in traditional Western garb, with each champion adding his unique flair to the bar. Varus’ bow is adorned with feathers and has a heavenly shine, while Talon’s sword gleams with the blood-red colors of the demon skin line. Talon will also receive the set’s Prestige skin, which will transform him into a classic golden color.

Mordekaiser High Noon appears as yet another demon ascending from hell, wearing steel armor and a forge-like chest plate. He even wears a Western-themed belt buckle shaped like a bull, and he wields a gigantic mace that makes him look like an actual final boss of an RPG game.

This skin will be available on May 12, the day after patch 12.9 goes live.