Rumors of Teddy leaving T1 to LCS or other LCK teams 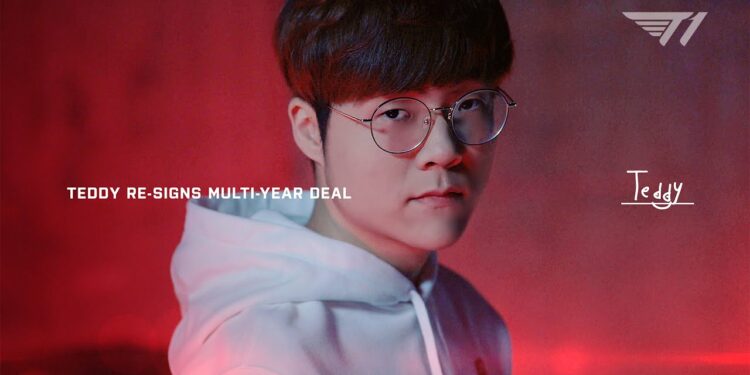 Teddy, T1’s former AD carry, is seeking for a new League of Legends team following his three-year run with Faker and his team.

Teddy was seen again in the summer of 2021, after Gumayusi unexpectedly fell, and the experienced player did not disappoint fans. He performed extremely well, particularly with champions like Ezreal and Varus of the LCK Summer 2021 playoffs versus Gen.G Esports.

However, after two unsuccessful games 1 and 2 in the 2021 LCK Summer playoffs final against DWG KIA, Teddy was replaced by Gumayusi and “disappeared” from then. He still appears in the photo with the rest of T1 for Worlds 2021, and still travels to Iceland with them, but he doesn’t compete in the tournament.

Teddy’s time with T1 appears to be coming to an end, according to Korean media. The player could not compete for the position with Gumayusi, especially when the young marksman of T1 played more and more firmly. According to LCK regional media, there are several teams from the LCK itself and even the LCS has made a contact with Teddy.

The LCS, on the other hand, is thought to be a more promising environment for Teddy, according to Upcomer. Strong teams such as DK, Gen.G Esports, T1, and HLE are all attempting to come back to the top in the current LCK.

Teddy has always been an ADC who knows how to shine if given the right opportunity. Only the time and meta of the current League do not support him. On November 15, Teddy will be out of contract and game 2 of the LCK Summer 2021 finals may be the last time the talented Gunner ADC player will be wearing a T1 jersey at a major tournament.