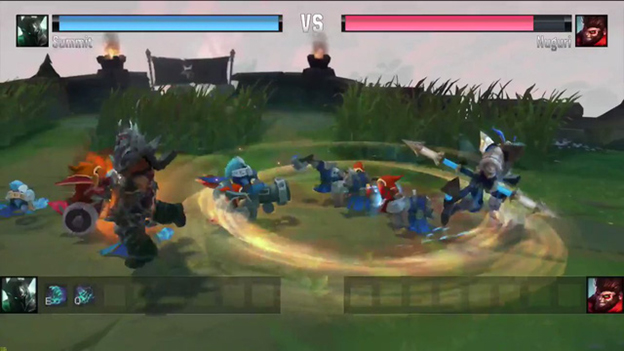 Admiring these images, gamers may have reasons to expect the launch of the fighting-game League of Legends that Riot is developing.

Solo-kill phases are always dispensible intellecture nourishments of LoL. In the professional competitions, when all gamers try to do their best in teamwork and lead to the victory with “the powerful of friendship”, so the solo situations show the skills of two players, which is always a great thing. Moreover, they both are top stars of the world.

Referring to the most famous solo phase in history, it is definitely the fight between Faker and Ryu. Recently, a solo-kill situation between the Mordekaiser of the Summit and the Wukong of Nuguri, which took place in a match between SANDBOX Gaming and DAMWON Gaming during the first week of the group stage LCK Summer 2020.

This is a solo situation that brings fan the excitement when the two gamers are having a together and it becomes even more attractive when restored under the perspective of a fighting game.

In a more close-up perspective of this situation, fans have witnessed solo kill extremely fiercely, moreover, it’s to have a look at the standard handling situations of a leading professional player.

Nuguri’s Wukong  was the one who won the situation, but with very little HP, after the extremely good and accurate handling capability of both players. That is why this is considered to be one of the best solo-kill situations up to the present moment of the 2020 LCK Summer tournament.