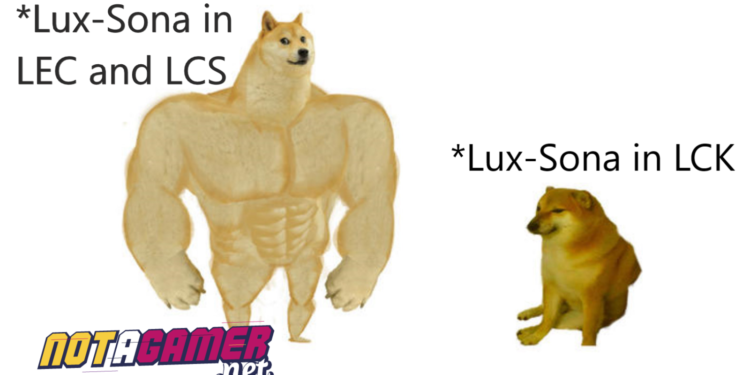 Sona-Lux bot lane is one of the latest “no ADCs” tactics developed by the League of Legends world community.

The bottom lane meta of the League of Legends has changed quite a bit over the last few years. Even if the traditional ADC with support pairing is obviously the norm, there have been and still are points where various strategies take center stage. There has been an interesting diversity evolving from mage APCs to Sona and Taric/Tahm Kench. Now, Sona ‘s new duo partner is stepping up to take the places of Taric and Tahm. It is none but the Lady of Luminosity, Lux.

It’s been a sleeper solo queue strategy for a while, but Cloud9 debuted the Sona-Lux duo in the bot lane against Team Liquid in the LCS this weekend. In most people’s heads, it seemed to have come out of nowhere but is certainly reminiscent of previous Sona lanes. C9 lost this game, unfortunately, but the duo’s intensity shone through regardless.

Is that just a one-off strategy? Or is this a fresh, meta-defining lane? Time will tell, but it’s important for now to see how it works and how the tactic can be brought to its knees.

First of all, the support magician’s items received a large buffed in this 10.15 patch, according to some experts, its gold output is expected to increase by 500 percent. Such improvements have enabled both Lux and Sona enhance their strength impressively. Although the drawback of these support items is that they are reducing money when farming, the two generals can completely farm timing to mitigate this negative side.

Especially with the basic income overtime from SP items overall, if they know how to coordinate, the Lux-Sona couple will have more money than the enemies’ bot lane. By entering the middle of the game with this advantage, both Sona and Lux soon got up more required items than the opponent Support.

According to TES.Knight, Faker is no longer the best mid laner at the present time?

With the robust ability to attack-defend and lots of AoE skills, Sona and Lux give the allies a great advantage in team combat. When paired with a good late-game carry champion, Lux-Sona ‘s defensive skill would give the team several chances of winning.

The strategy also has some disadvantages, however. It requires two players with good farming skills to work well together from the stage of farming minions. Alternatively, if they are ganked early, Lux and Sona are likely to become good prey to the ADC or enemy Jungler. Therefore this technique is primarily implemented at the higher rank, it is difficult to popularize the League of Legends community.

Weakness in Sona-Lux gameplay of Cloud9

Team Liquid comp countered much of the strengths that Sona and Lux provide the team with, in particular, Morde, Trundle and Blitzcrank ults, as well as their control zone. Furthermore, C9 lacked significant team-fighting damage, in especially the way they choose their items. Also, the Spellthief’s has not been buffed on the live LCS patch, making the duo weaker at all game stages.

Looking at how Mad Lions used this bot-lane duo to gain a convincing victory over Origen. The Sona and Lux combo was unstoppable!

Rampaging in LEC and LCS, but useless in LCK

Nevertheless, this strategy can not be used successfully by all regions at once, since each region has a particular way of fighting and creating its own squad.

As you can see, when used on the Westside, LEC and LCS, the “weird” Sona-Lux duo in the bot lane has specific effects on the match, but when looking into the LCK,… Much as the 300 gold minions take on themselves.

Although Sona scales very well, and the duo offers incredible teamfight potential, they lose out on a traditional AD Carry’s late game damage unless they have a top lane or jungle marksman. If the Mid Laner goes for an AP Carry, they will stack heavily on purely AP damage, especially when either top or jungle is going for tanky/engage. They are very comp dependent to work as intended.

What do you think about the duo? Do not hesitate to leave your comment!