Stargazer Skinline: LOL community fetched a sigh while looking at Wild Rift exclusive skins: “I WISH we could get it on PC” 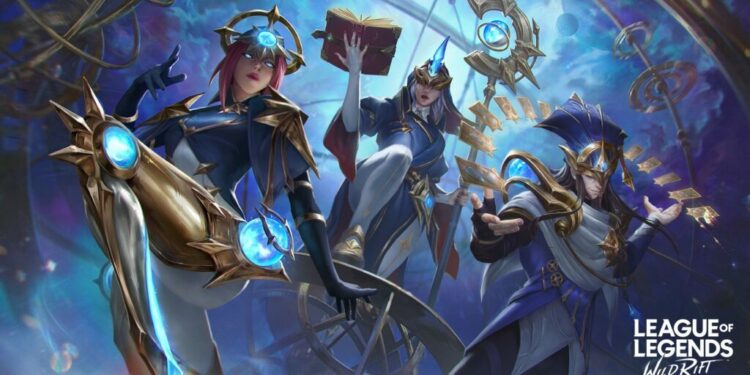 Stargazer Camille, Hexplorer Jax and so more are discussed enthusiastically in Reddit right now after being released in patch 2.2 of Wild Rift!

It seems like that many League of Legends gamers want the new, gorgeous Stargazer Skinline of Camille, Twisted Fate, Soraka, Jax from Wild Rift to be included in the PC version. The newest skins are highly appreciated by the League of Legends community. Is this an effort of Riot to attract more players from LOL to Wild Rift? Now, let’s take a look through the 2 new nice-looking skins!

With the main color of Sky Blue and Earth Yellow, Camille dives into the combat like the Queen of stars. Riot has added many beautiful pieces of jewelry onto the female champion so that she’s shining like a diamond.

She still is very pretty effects-wise! The skill effect looks like Legend tier, from Precision Protocol, Tactical Sweep, to her pretty yellow shield, everything is carefully designed to make her look more powerful on the rift! She also can do mask transition cleanly, pull out the book and read, that huge investment of Riot has surprised many players! Some gamers joke that they will simp for this old lady for any price!

Receiving many compliments from League of Legends fans but he’s supposed to overly look like Yorick.

Jax, with the weapon in his hand, a futurism shovel with blue lighting crystal on the top, is going to be a big deal for gamers!

He’s also as rich at skill effects as Stargazer Camille. Dodger blue spinning of Counter Strike makes the enemies fear being stunned by him. His Empower and Ultimate can open up the shovel to release the power of the next attack! Grand Master’s Mind, one of the most special passive in League Of Legends, dealing bonus damage to the enemy every 3 attacks, looks stronger by the lightning striking from the air!

It is true that Wild Rift’s skins are beautifully designed from the skin to the effects of the skills. This makes League of Legends gamer even more regretful when the outfits are only available on the mobile version. Let’s just see what is the next move of Riot Games to satisfy these craving customers!