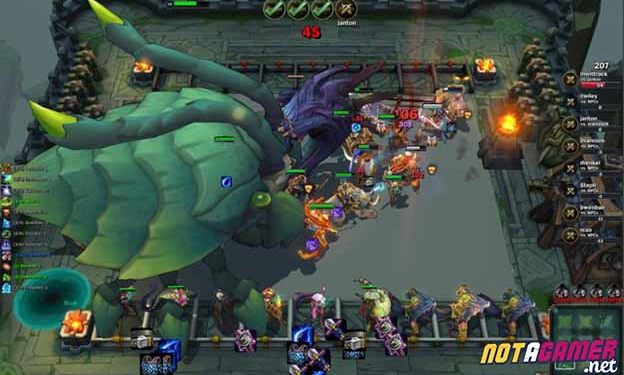 Before the current perfection, the Teamfight Tactics used to have a lot of funny and difficult ideas.

Officially releases on June 26, 2019, the Teamfight Tactics has immediately caused a fever in the League of Legends community. Part of the reason comes from the fact that the Auto Chess game genre at that time was too attractive, combined with the huge number of players available of League of Legends so it is not difficult to understand when this mode is so hot.

Of course, Riot Games will not launch such a large mode without careful preparation, perhaps they have the idea of ​​creating their own Auto Chess. However, no matter how prepared, with almost having to create a completely new game in too short time, the visual and interface errors are inevitable.

Riot Wittrock, a senior designer at Riot Games in the Teamfight Tactics, published images of the regime’s earliest form. Most noticeable is probably the image that is humorous when the Rift Scuttler is bigger than Baron and occupies the entire chessboard area. Besides, the falling items on the map are also signs that this is an extremely early trial.

An interesting point is that in these early designs, we did not see the appearance of the Little Legends. The second point is that champions like Vel’Koz, Bard, Viktor have also been tested in the Teamfight Tactics, but these champions still have not appeared, even in season 2.

In addition to announcing this hilarious image, Riot Wittrock also revealed that he and the design team of the Teamfight Tactics are also finalizing the system of champions for season 3. Most likely in the future, Teamfight Tactics will be divided cycle clearly as 6 months or 1 year a new season, like how season 2 with the name Rise of the Elements.