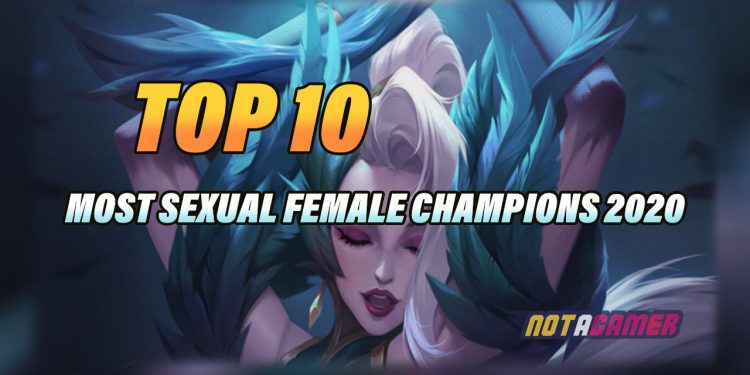 Hello fellow League of Legends fans, We are going to show you the Top 10 Most Sensure League of Legends Female Champions 2020 based on our data researches. Stay tuned! There is a video of their comparison from 2016 to 2020!

Along with the champion description, we also gathered awesome fanart from digital artists all over the world with the “SAUCE”! Enjoy reading the article and let us know in the comment section if your favorite champion is on the list.

Released in 2009, Morgana is one of the most long-time popular league of legends mid and support champions. Morgana is the daughter of the Aspect of Justice and Kayle’s sister. Morgana was also a guardian of Demacia in an earlier era. However, she now serves out of her own justice on the outskirts of Demacia on a personal level.

Zyra was released in July 2012, Zyra is originally a species of carnivorous flowers that were destroyed in a magical cataclysm by a sorceress. However, the flowers reborn and took on a single humanoid form and become Zyra, the champion.

As of champion design, Zyra is like a League of Legends version of DC’s Poison Ivy (1966). Poison Ivy is a fictional supervillain in DC Comics, commonly in Batman stories. She is a Gotham City misanthropic botanist and biochemist who is obsessed with plants, ecological extinction, and environmentalism.

Released in 2010, Irelia is one of the most popular mele champions in Top lane. Especially after her rework in 2018, Irelia became even more popular with her practical dash and stun kit.

Irelia is a hero of Ionia for her part in helping defeat the Noxian invaders. She is viewed as a symbol of the Ionian people.

Even though Fiora was released in early 2012, she is still one among the mele champions in Top lane like Irelia. Fiora is the Head of the Demacian noble house of House Laurent.

Some of you may be wondering how this champion who comes from a Noble family could be in the Top 10 most sexual female champions. The answer is based on her design, she has some badass and sexy skins like Project, Nightraven, Soaring Sword, Pool Party, and Headmistress. However, Riot Games did not sexualize her skin or her champion design.

No doubt that Kindred is on this list. Why? Kindred is an anthropomorphic animal character with human personalities and characteristics. Also, the fandom of this kind of character is known as Furry or Furries.

Released in 2015, Kindred used to be one of the hot picks in season 6 to season 8. Even though she is still strong early to mid-game, not many players play her anymore due to her marksman skillset and statistics.

Among the first League champions ever released, Evelynn is a demon who uses a seductive facade to lure people in. She feeds off of their pain and misery, torturing others so she may continue to live. Her bio and her character design are the obvious proofs that she “deserves” to be here in the Top 4.

Released in late 2013, Jinx is still one of the most famous Marksmen/AD-Carries in League of Legends. Despite her flatted chest, she is still in Top 4 most sexual female champions in League. Perhaps not only how she looks, but also her personality brought attention to the League and other communities. Jinx is like League of Legends’ own version of DC’s Haley Quin.

What??? Top 2? Why not Top 1? The answer is she is pretty close to Top 1 based on the fan base and popular picks in League. Ahri was released in late 2011, she is a Vastaya from Iona. Ahri fed on the memories and emotions of others, then killed people in the process. Ahri is as popular as Overwatch’s D.VA.

If y’all don’t know, the Riven fandom is just as HUGE as Ahri’s. Riven is one of the top picks for Top lane throughout the years. Released in 2011, Riven is a solider with complete faith in Noxus. However, she now resides in Ionia, seeking redemption in her own self-imposed exile.

Our Top 10 is different than the comparison video based on our research data, ages and other category matters. Let’s take a look at What Is Looks Like’s Top 10 Most Sexual Female Comparison from 2016 to 2020!