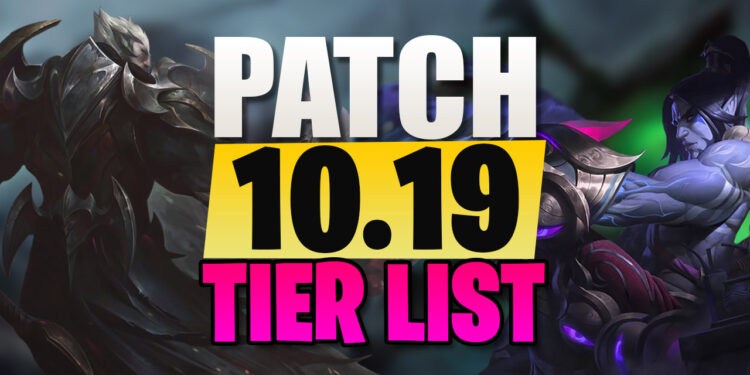 Riot has updated League of Legend recently with League patch 10.19. This patch will be the major one because the Worlds 2020 will be played on. There are some minor changes as well as the big ones. We are going to go over five-tier lists aimed at helping you guys choose the best Champions for climbing.

We are actually got ton of new skins in this patch. A long with release of Samira and her PsyOps skin, we also have 4 more PsyOps skins for Viktor, Zed, Pyke and Kayle. Championshio LaBlanc and Prestige Edition of True Damage Yasuo will be available in the game that you can earn.

In this patch, we have only got one buff in the top lane – Irelia. Pantheon and Kayle have been move from B-tier to the A-tier.

Though we might not see Irelia at Worlds often, Irelia has received a buff in this patch. This change will make Worlds a bit flashier and a little bit more exciting. Irelia is a late-game Champion, she gets a buff in barrage and perimeter base damage, this means she will deal more damage than before with her Ultimate in the mid or late game. Her damage output remains the same, so I think this is a balanced change, she is only stronger when she cast her most important ability. We happily keep her in the A-tier for now, because she is not the best option for solo queue, however she showed she is a incredible competitive pick.

Kayle’s recent changes actually left her much stronger and it is time that she move up a tier as a result for reference her win rate at the end of the last patch was 51.5%.

Pantheon is an incredible support right now, which is a little weird. We feel he is a wonderful flex pick that players can take advantage of since he play in so many different role. Pantheon’s ability to roam and impact the map make him a great pick for all players.

In our OP tier, we have Darius, who is just an absolute solo queue monster. With a 40% ban rate in high ELO, and 47% in lower ELO. Even in high ELO, where he is supposed to get kited and outplayed, this guy still stirring up tons of frustration and players just can not seem to deal with him.

First up is a buff to Ivern. It is pretty cool that Riot has decided to buff up their utility-based jungler just in time for Worlds. This will help diversify the types of viable team compositions and hopefully allow teams to mix up their play styles.

With this buff, Ivern’s ganks as well as his peel in team fights should feel much stronger then before.

Though this is a small buff, but this make Ivern become a noticeable Champion in Jungle.

With this buff, Udyr’s win rate rose to 51% this patch, his AP build should be a lot stronger and I guess there will be some new build developed by pro-players.

Rammus is in OP-tier. This pick is very effective in low ELO but he is popping off across every rank. He is tanky and it is easy for him to land crowd control while deal tons of damage.

Hecarim is the second Champion in OP-tier. He can be seen across all ranks with a 52% win rate and a 12% ban rate overall. Even GrabbZ – coach from G2, is bringing terror to all sever China with his Hecarim while the whole team is training for Worlds. (Read more about this here)

Ahri received a compensation buff for the unintended nerf that she got last patch. Her W cooldown reduced 1 sec in every level, and also cost less mana. This made her stronger but not too OP.

We moved her back to the A-tier and glad to see her return.

Sylas also receive a nice little buff this patch, his Ultimate cooldown has been reduce from 100 to 60 sec to 100 to 40 sec. His cooldown of Ultimate is a big deal, less cooldown means he can make a lot of pressure on opponents.

We moved Sylas up to S-tier in Top Lane, but he is also S-tier in Mid Lane.

Yone is still the OP-tier Champions on Mid Lane. His ban rate is still through the roof and players are struggling to deal with him. He is an aggressive champion that has plenty of ways to get in and out, in additional, his damage output is extremely high and players are still getting used to playing against him.

We have a marksman changed with a buff coming to Sivir. The movement speed bonus on her passive is being increased from 30 to 50 to 35 to 55. Five movement speed can make a difference sometimes. But Sivir’s case is not that typical speed buff, instead, her passive only applies when she is in combat.

However, it is easier for Sivir to hunt enemies down, along with her Support or in team fights. We considered this then moved her to B-tier on Bot Lane.

Riot loves buffing flashy Champions, don’t they? So yes, they buffed Vayne. They have buffed her Ultimate bonus AD.

This is a noticeable buff, after level 6, Vayne is going to have a lot more AD and kill pressure than before. She will snowball even harder than before. The more damage helps her swing the match toward her and reward her more heavily for capitalizing on her enemies mistakes.

Considering that a lot of Lane Bullies are getting nerfed, we moved Vayne up to S-tier. This seems quite volatile and we have to really see how the meta develops now.

Finally, Aphelios is going to receive a buff, this will be the first opportunity he has to be played on the Worlds stage.

His AD per level increased from 2 to 2.4, this change is not significantly stronger, but he will gain more benefit from 7 extra AD in late game. It is a balance buff for the whole game while stop Aphelios being a meme machine due to his weakness.

Aphelios is being set in A-tier, for now.

With no Support changes to note, we can go ahead to Top Tier.

Morgana has always been a great answer to lockdown Support because of her Black Shield, she can block hard Crowd Control and basically eliminate most of the pressure of enemy Supports bring to the Rift.

Lux, on the other hand, is so much value to her team, her crowd control is excellent for both peeling and picks making while her shield provides incredible value, she can block an insane amount of damage for several allies at once.