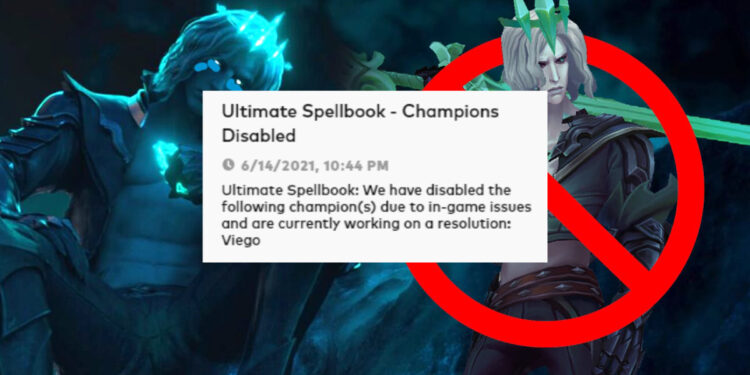 Riot recently announced the ban on Viego from Ultimate Spellbook game mode on the PBE test server. The reason is that this Ruined King continues to bring numerous bugs that are difficult to solve immediately.

Combining the new mechanical in this new game mode allows players to build a variety of stunning combinations of Ult. However, with some specific champions that are unplayable, such as Viego, The king of Bug, this has caused many inadvertently unwanted bugs.

This bug is the result of the Ruined King and Cho’Gath Ult. The bug will occur to some extent as each time the champion grows in size as a result of the use of Cho’Gath Ult. His health expands, in particular, will constantly be visually almost no helath despite the fact that he is still full HP.

Viego will then be immortal, immune to any damage even if he stands in the enemy’s fountain. Then finally, Viego will also have up to a couple of thousand of AD that allows him to one-shot any target. The consequences of the above bug series led to the champion causing a crash of the game, forcing players from both teams to immediately disconnect.

There have been a lot of gamers reporting to this bug but Riot temporarily has no solution but to ban him in the game mode. The Ultimate Spellbook mode will be released in version 11.14 so the technical team still has time to fix it. In case of non-resistance, Viego will be banned permanently in this mode when it is officially launched.