Why no one likes The friendly Green Father Ivern ? 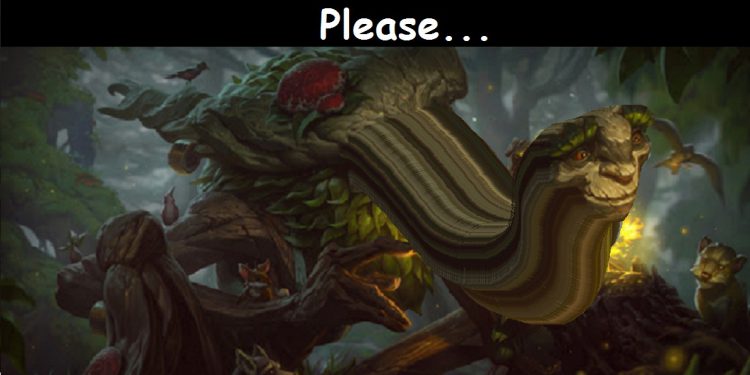 Ivern’s story was interesting from the moment he was announced not just because he is a new champion which everyone’s always excited for but the nature of his release. Ivern was designed to be a support jungler which is a completely new type of champion. Not like Sejuani or Nunu who are considered as supportive junglers, Ivern is more of a Enchanter ( like Nami, Janna, Lulu, etc.. ) a role that is typically withheld for the bottom lane. This concept is a solid idea from Riot to refresh the jungle role just like how they did with Kindred, a marksmen jungler.

Ivern was released at the end of season 6 in patch 6.20, and got some buffs, QOL changes and bug fixs in the later patchs, at that time he’s considered a weak champion with bad jungle clearing, little to no impact in a match but everything changed at the start of season 7. After Ivern got buffed, the jungle few weeks later was also changed, the introduction of new plants, small camps spawn time and experience changes, smite now heals on every camps and a new support item called Redemption. These changes are all beneficial to Ivern, he immediately became the strongest champion in the game. He easily covered all competitive scene, his new set up item was so strong it is comparable with the most broken meta which is Janna using Ardent Censer.

A month later, Ivern received 2 nerfs in just one patch, patch 6.24 saw a direct nerf to Ivern’s E and turned out he was still very strong, so Riot nerfed him again in the hotfix for 6.24. In patch 7.8 his W can no longer hide epic monster with just one bush, this nerf removed Ivern out of competitive scene because his E was a great tool to deny enemy’s vision on epic monster. On patch 7.10, his jungle clearing also got nerfed making his super weak early game even weaker. Patch 7.12, his E received a base damage reduction and finally on patch 7.14, the cast range of his W is halved. In League of Legends history, Ivern is the only champion who received this much consistent and consecutive nerfs. These patch gutted Ivern and he would never recover from it unlike the others like Vayne, Yasuo or Lux who were weak in the past but because they are so popular, they could make their ways back to the meta.

If Lux, Yasuo or Vayne could make their ways back to the meta, why Ivern couldn’t? That’s because of his design. League of Legends players tend to love those champions who have humanlike features and Riot knows that, especially after Ivern, Riot’s new champions are all humanlike ( Kai’sa, Sylas, Qiyana, Aphelios, Sett,..). The theme of a wooden magical jungle protector is not a bad concept, consider western culture is familiar with fantasy genre, lots of series and franchises have this theme ( World of Warcraft, Lord of the Rings, etc.. ) and they still succeeded. In League of Legends there is a Elderwood skin line similar to Ivern design and theme, this skin line is pretty succesful.

The problem with Ivern is his kit and playstyle, because he is a enchanter, he is too dependent on teammate and the carry. No matter how good the player as Ivern, Ivern couldn’t carry the game because his kit is designed for supporting the carry not to carrying the game himself. In SoloQ and Ranked, everyone wants to be the carry, there is no reason to pick Ivern instead of Lee Sin, Khazix or Rengar, … Ivern may never comeback to the meta without Riot’s intervention with buffs or even a rework.