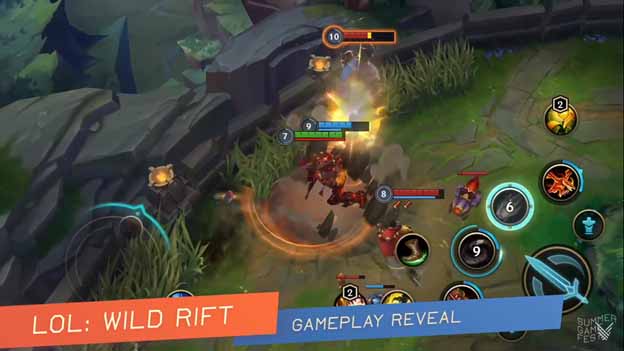 Recently, League of Legends: Wild Rift has launched a short clip to let players see the gameplay has been increasingly clearly shaped.

Finally, after all the waiting time … we have the most overview of League of Legends: Wild Rift.

As announced by Riot Games, at the end of May, gamers will have the latest information on the Alpha Test version of League of Legends: Wild Rift. It is expected that this alpha test version will only be available in two countries, the Philippines and Brazil, not on a larger scale like the Teamfight Tactics Mobile.

As planned by Riot Games, they planned to reveal more about the gameplay of the League of Legends version on mobile/console, League of Legends: Wild Rift at the SummerGamesFest event was live-streamed on Twitch.

During the presentation of this gameplay, Brian “FeralPony” Feeney, Head of Design Team Wild Rift, participated in the interview tonight and provided us with more information about the MOBA game that is receiving a lot of the attention of the community.

In this video, Riot Games has introduced quite a complete and detailed game gameplay and its interface … can see, the game interface is designed very nice and user friendly. Its graphics must be called amazing with the details of the context in League of Legends …

Firstly, it seems that Alpha Test version is relatively complete and can be ready for gamers in the Philippines and Brazil in June. What happens relatively smoothly with frame stabilization. The image quality in the game is still at a good level, the skill effects are quite nice and show the dramatic in the combat screen.

Secondly, an important factor is that League of Legends: Wild Rift still warns the last hit for gamers when the soldier’s health is white so the player will perform his last hit phase. But this clip still shows the amount of gold received even though it didn’t last hit.

Earlier, there was information that, the limited test version this time, the number of champions was slightly shortened, to only 36 champions. Accordingly, Cassiopeia, Darius, Diana, Draven, Jax, Riven, will not be present in this test, instead, gamers will have a new face, Varus. The list of 36 champions is supposed to appear in the test version of League of Legends: Wild Rift according to the image below:

Of course, this is just a gameplay introduction, the rest will still have to wait for the day that League of Legends: Wild Rift will launch a limited test version next month, at which time we will have the most accurate answer. For now, gamers’ accounts that have signed up for Tester League of Legends: Wild Rift, remember to receive the latest announcements from Riot.