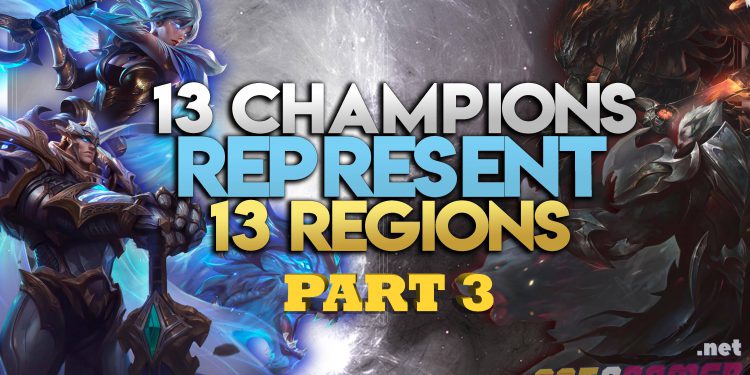 Shadow Isles was once a beautiful realm, but it was shattered by a magical cataclysm. Black Mist permanently shrouds the isles and the land itself is tainted, corrupted by malevolent sorcery.

Living beings that stand upon the Shadow Isles slowly have their life-force leeched from them, in which draws the insatiable, predatory spirits of the dead.

Those who perish within the Black Mist are condemned to haunt this melancholy lad for eternity. Worse, the power of the Shadow Isles is waxing stronger with every passing year, allowing the shades of undeath to extend their range and reap souls all across Runeterra.

Thresh – The Chain Warden, not only known as Mr. Stealyogirl, but also an ambitious and restless spirit of the Shadow Isles. Once the custodian of countless arcane secrets, he was undone by a power greater than life or death, and now sustains himself by tormenting and breaking others with slow, excruciating inventiveness.

His victims suffer far beyond their mortal coil as Thresh wreaks agony upon their souls, imprisoning them in his unholy lantern to torture for all eternity.

Renowned for its mastery of elemental magic, Ixtal was one of the first independent nations to join the Shuriman empire. In truth, Ixtali culture is much older—part of the great westward diaspora that gave rise to civilizations including the Buhru, magnificent Helia, and the ascetics of Targon—and it is likely they played a significant role in the creation of the first Asccended.

But the mages of Ixtal survived The Void, and later the Darkin, by distancing themselves from their neighbors, drawing the wilderness around them like a shield.  While much had already been lost, they were committed tot the preservation of what little remained…

Now, secluded deep in the jungle for thousands of years, the sophisticated arcology-city of Ixaocan remains mostly free of outsiffe influence.

Malphite – Shard of the Monolith, is a massive creature of living stone. Malphite was born from the heart of the great Ixtali construct known as the Monolith.

He has studied the elemental balance of Runeterra for thousands of years, using his tremendous strength to maintain order in a frequently chaotic world. Now, roused all too often from his slumbers, Malphite endures the fluid temperaments of mortals, while struggling to find a cause worthy of the last of his kind.

Opinions differ as to where exactly the home of the yordles is to be found, though a handful of mortals claim to have traveled unseen pathways to a land of curious enchantment beyond the material realm. They tell of a place of unfettered magic, where the foolhardy can be led astray by myriad wonders, and end up lost in a dream…

In Bandle City, it is said that every sensation is heightened for non-yordles. Colors are brighter. Food and drink intoxicate the senses for years and, once tasted, will never be forgotten. The sunlight is eternally golden, the waters crystal clear, and every harvest brings a fruitful bounty. Perhaps some of these claims are true, or maybe none—for no two taletellers ever seem to agree on what they saw.

Only one thing is known for certain, and that is the timeless quality of Bandle City and its inhabitants. This might explain why those mortals who find their way back often appear to have aged tremendously, while many more never return at all.

Most of the time, whenever some mention about League of Legends, the first champion who pops-up on their mind is Teemo – The Swift Scout.

Undeterred by even the most dangerous and threatening of obstacles, Teemo scouts the world with boundless enthusiasm and a cheerful spirit. A yordle with an unwavering sense of morality, he takes pride in following the Bandle Scout’s Code, sometimes with such eagerness that he is unaware of the broader consequences of his actions. Though some say the existence of the Scouts is questionable, one thing is for certain: Teemo’s conviction is nothing to be trifled with.