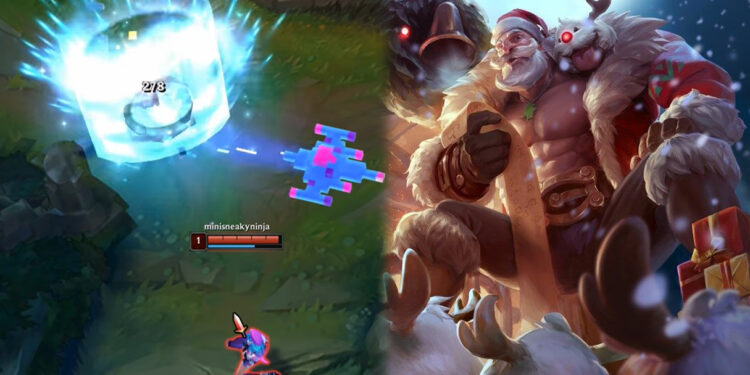 Braum, as we know, owns one of the most potent defensive abilities in League, his E – Unbreakable. When activated, he sets his shield for a few seconds, creating a barrier that intercepts all incoming hostile projectiles. Furthermore, Braum absorbed all of the first attack’s damage while lowering the damage of any following strikes conducted from that direction.

That’s the description of his E that we’re all too acquainted with, but recently, it is discovered that this skill is capable of much more. As Youtuber Vandiril pointed out, Braum’s Unbreakable (E) now has the ability to counterattack the projectiles or skill-shots coming towards the shield.

The interesting thing here is that when Braum’s E counters an opponent’s ability, it automatically targets the nearest enemy champion, even when the champion is in stealth. If such skill destroys the opposing champion after a counterattack, the kill will still belong to the opponent.

So yet, this unexpected interaction with Caitlyn’s Q has gone unnoticed. However, it is impossible to rule out the possibility that Braum has disclosed many more plays that we are unaware of. Not to add that skills like Yasuo’s Wind Wall might have also been affected by this bug.

Hopefully, Riot Games will conduct a thorough study so that the above-mentioned bug does not occur again. It will be inconvenient if you are knocked down by an opponent’s skill despite the fact that your teammates have previously blocked the opposing skill.