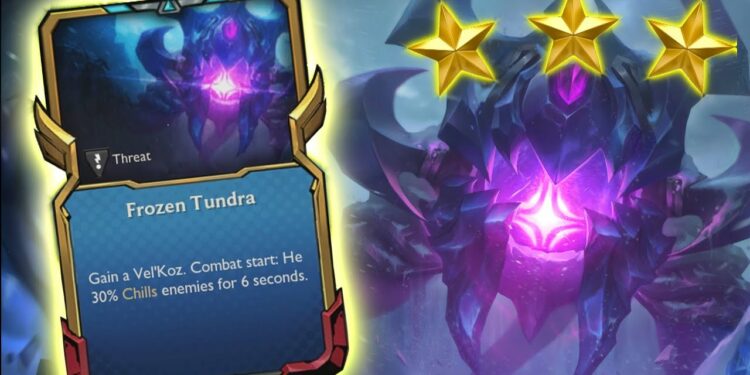 The plan is fairly straightforward; you’ll use two Vel’Koz equipped with full-damage items to eliminate the opposition’s carry and essentially win the battle as a result (Vel’Koz will target the enemy champion who has dealt the most damage to this round). The plan became very stable on stage 4 and, if properly executed, in early stage 5, it will be possible to rush a level 9.

The crucial aspect of this comp is that it advances to level 7 in 4-1 with a strong front-line and enough gold to roll for a double Vel’Koz. The four mascots are generally good, but if you can find both 2 stars, you may switch to the Rammus and Cho’Gath. They help a little with damage as well, and if the Cho’Gath is well placed, it’s really simple to take out the opponent carry with the combo of cho + vel + vel. It’s crucial to stock the Vel’Kozs with as many damaging items as you can.

Therefore, you can deploy Mascots front line with some AP carry, such as Lux, Lulu, Yummi, Ezreal, Jinx, etc., to travel until level 4. It’s a simple method for making the switch.

Following stabilization, you can either move up to level 8 to roll for a rammus-3 or cho’gath-3 if some of them are close, or level 9 to strengthen the board with some legendary or powerful 4 prices. The best options are:

You can choose any augment that makes sense for the comp from the available options (Vel’koz frostburn is insane, though).

Mascot emblems are decent; at level 8, Nunu may complete four of them. Additionally, there is a Civilian symbol, making it simple to get three civilians, giving the Vel’Koz incredible mana generation.

This strategy is OP at the moment, which can easily dominate the whole Set 8 until next patch. Don’t forget to try it before too late!